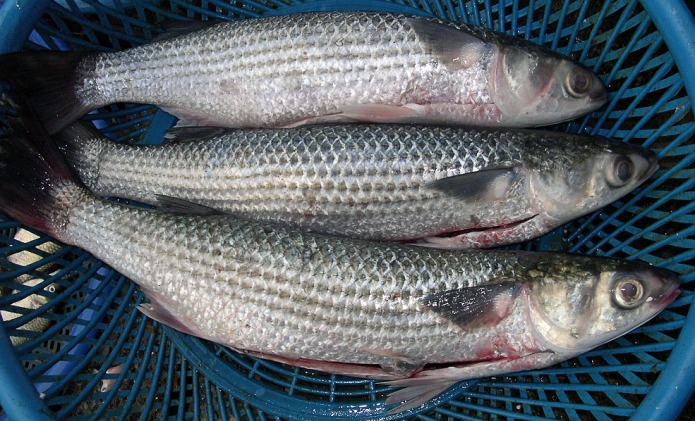 Lisa or Llissa is a fish which traditionally used to be eaten in Mallorca during Lent, or so I am told. The fish may be better known to you by its Latin name, Mugil labrosus, not the same but similar to Flathead Mullet or Striped Mullet. We had Llissa yesterday for the first time ever and we were totally surprised about its splendid taste and texture. If you can find Llissa in your local fishmongers or market, try it. It is not totally unlike the Dorada (Gilt-head bream) or the Lubina (European sea bass). Somehow, I have gone off these two because you can only buy them as aqua-cultured, farmed species and I don’t like these for the high content of chemicals in their feed. Llissa is different; this fish is not farmed. Also, it suffers from a low esteem and thus, is not economically viable. We paid 2 € per kilo; no wonder the fish is not widely on offer. When Mallorca was less affluent, before the tourist boom, Llissa was part of the mainstay consumption and most men went out to fish for it near the coastal rocks. As I said, Quaresma (Lent) would have been unthinkable without this fish. Should you buy one, make sure the fish is fresh and prepare and eat the Llissa the same day of your purchase. The fish deteriorates in taste and can virtually not be eaten 72 hours after its catch. We enjoyed what we had last night, prepared in the oven with fennel and courgettes and a dressing of soy sauce, ginger, sake (rice wine) and coriander.

The photo (top) was borrowed from the Internet, courtesy of seafood.nmmba.gov.tw. The photo (bottom) was taken in Felanitx, Mallorca, Baleares, Spain. The date: March 3rd, 2012. The time was 20:44:04.