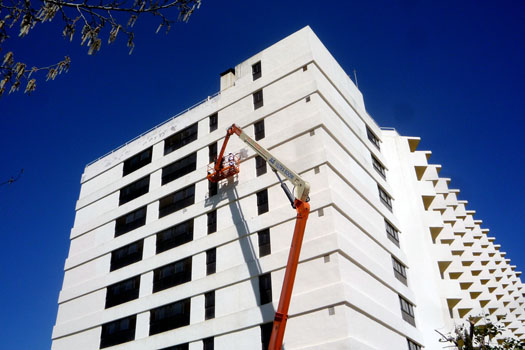 Today is the third Sunday of Cuaresma. Now there are just over three more weeks left till Easter.

I’m mentioning these religious holidays because Easter traditionally marks the start of the Mallorcan tourist season. Sometimes the season’s start does not coincide with the calendar, for instance when Easter falls too early in the year. But this year it should be alright. Everyone is hopeful that 2009 will be a reasonable season. Let’s just wait and see.

It is a fact though that the Mallorcan hotel operators rather moan before the start of the new season, and complain that it should have been better once it is finished. Only later one finds out that most seasons were good ones, occasionally interspersed by record breaking years. Let’s see if La Crisis will bring some moderation back into fashion.

Over the last week or so, one could see a number of tourist establishments doing their bit of Spring cleaning, putting the final touches to their preparations, to a paint job or a touch-up, to some small repairs that still needed doing before the first guests arrive. The tourists that have already arrived are soaking up the rays of the Mediterranean sun, basking in the glory of some early hot spells. The first sunburns were spotted yesterday.