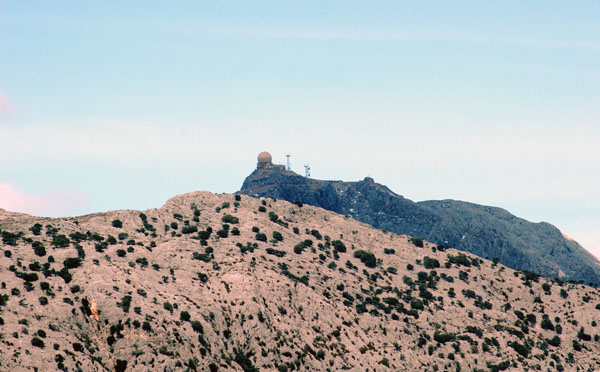 Puig Major, also sometimes called Puig Major de Son Torrella, is Mallorca’s highest mountain with a height of 1,445 m, and is the crowning summit in the Serra de Tramuntana. The top of this mountain is off limits as a military zone. Thus, the neighboring peak at Puig de Massanella is considered Mallorca’s highest accessible peak (1,364 m). Special permission for mountaineers to have access to the peak of Puig Major is sometimes granted, though, upon application from the Acuartelamiento Aéreo Puig Major (Air Barracks) by telephone (971.637.000). Permission procedures may take a few days, however, but patience may be rewarded.

The building seen on top of Puig Major is a military radar tower, built and installed by the Americans in 1958. Some considerable secrecy is involved as to the nature of the military installations and whether responsibility rests with the Spanish and/or the US Forces. Perhaps you know more than I do.

In 1934, plans were drawn up to build a funicular up to the top of Puig Major. As far as I know, the platform for the bottom station was built and is in place to this day. Further construction was halted though, first because of the Guerra Civil, and later, on Franco’s orders. At that time, the military installation did not yet exist. After 1958, a road was built leading up to the radar tower, and the need for a cable car construction became obsolete.