The Destiny and Fate of Luis Lacy Gautier 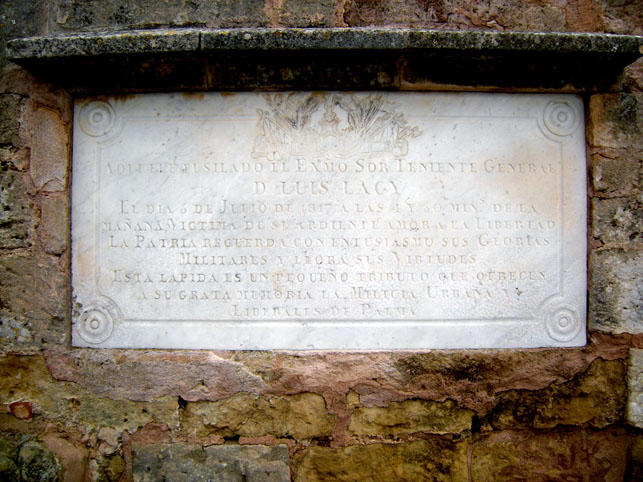 When visiting the Castell de Bellver southwest of Palma de Mallorca you may have seen a largish commemorative plaque in honour of Don Luis Lacy. You may well have wondered what this was all about, just the way I did. Well, I found out for you about the destiny and fate of Luis Lacy.

Luis Roberto Lacy y Gautier (1772-1817) was the son of Spanish-born Lt. Colonel Patrick de Lacy Gould Jnr. of Irish ancestry. His mother was Antonia Gauthier of French descent, with her family also from a background in the Military. 194 years ago today, on July 5th, 1817, in the early hours of the morning Lieutenant General Luis Lacy Gautier was shot dead by a fusillade of gunshots. The scene of the execution was the very Castell de Bellver. In the aftermath of the Guerra de la Independencia (Napoleonic Wars), he had sided with the Liberals and had been in favour of the new Spanish Constitution of 1812. In 1817, he was accused of preparing a putsch against the authorities, was arrested and sentenced to death. According to Wikipedia

…no Irish family has attained greater fame in the military history of Europe than the de Lacy family of County Limerick‘.

After the Spanish Liberal Revolution of March, 1820, de Lacy’s honours were restored posthumously. Then, his name was placed in the Hall of the Spanish Cortes (government) in Cadíz as having suffered death on a scaffold for the benefit of the Constitution.

I don’t know when the commemorative plaque was fitted at the Castell de Bellver as a tribute (see photo above) but, presumably soon after the 1820 revolution. 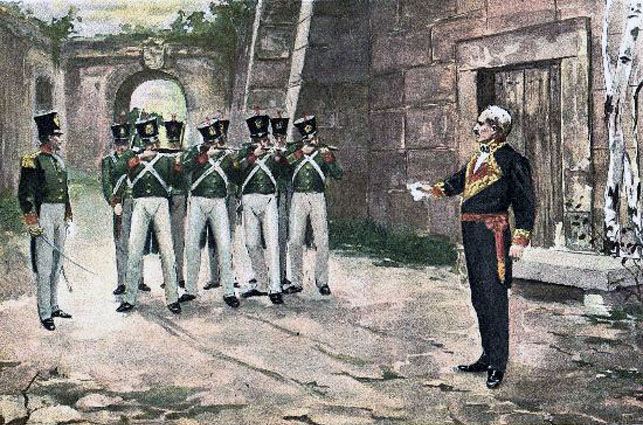 The photo (top) was taken in Palma de Mallorca, Baleares, Spain. The date: December 29th, 2010. The time was 15:21:17. The image (bottom) was borrowed from the Internet, courtesy of todocoleccion.net. It shows a print from the hands of Pablo Antonio Béjar Novella.

By mallorcaphotoblog
On July 5, 2011
2 Comments