When my friend Lluís went to secondary school quite a few years back, he went to the Colegio de Nuestra Señora de Montesión, then a boys only school. Nowadays, the school is a colegio concertado, i. e. open for boys and girls. Earlier this week, the school started celebrations for its 450th anniversary. Celebrations of all sorts and kind are scheduled for the next 18 months. The school was founded in 1561 by five Mallorcan Jesuits and the Society of Jesus. Pupils were admitted to the school in Palma as of 1562. The academic hotbed has been open for education ever since under the motto Iesus Hominum Salvator. The Colegio de Nuestra Señora de Montesión in Palma de Mallorca is the oldest Jesuit school in the world. There are currently approximately 1,100 students attending at the Colegio de Montesión in Palma. Since 2007, there has been a close collaboration with the British Council extending to preparations for entry into Cambridge University. Interestingly enough, the school is considered a private enterprise and does not come under the umbrella of the diocese of Mallorca.

For most of its history the Colegio de Montesión used to be the proud owner of the Llibrería luliana, a vast library of thousands of old and very old books and manuscripts of excellent provenance from the 17th and 18th century, and its famous antique bookshelves (see photo below). For some reason or other, the library was moved from the school’s premises to those of the Casa de Cultura in Palma but, mysteriously, all has been locked up and inaccessible ever since. Maybe after the demise of Franco 35 years ago and with now 450 years of reasons to be cheerful, the literary treasures may be returned to their rightful owners to finally allow Ignazio Loiolakoa (Ignatius of Loyola), the Jesuits founding father, to stop gyrating in his grave. Late is never too late. 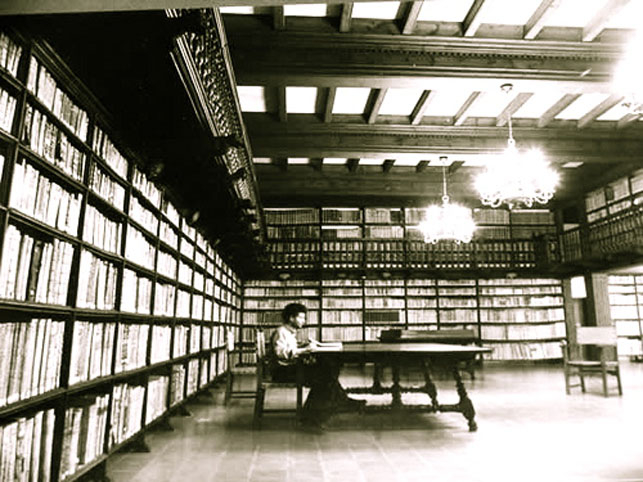 The photo (top) was taken in Palma de Mallorca, Baleares, Spain. The date: February 24th, 2011. The time was 15:27:48. The image (bottom) was borrowed from the Internet. Thanks are due to Alta mar, fabian.balearweb.net and the photographer, Juan Luis Coll.

By mallorcaphotoblog
On February 26, 2011
7 Comments