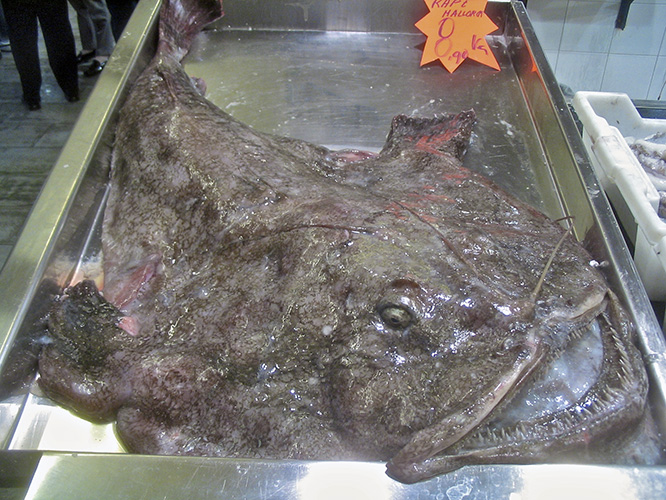 The Rape fish (anglerfish, monkfish, Latin: Lophius piscatorius) may not look attractive with its big teethed mouth, may even be considered ugly, but hey, it is ever so pleasing on the palate. In fact, Rape is one of my favourites when it comes to fish dishes. Its taste is not unlike that of a lobster tail in flavor and texture. The flesh of Rape is different from other fish in as much as it is not flaky but firm and meaty. Rape does not have the usual fish bones either; it rather has a vertebral column-like backbone. The skin of the fish has no scales either.

The fish in my photo was a specimen of easily 1 metre in length with a weight well in excess of 10 kilogrammes. Female Rapes can grow up to 2 metres in length weighing up to 45 kg. The local fish markets normally offer skinned and headless Rapes of considerably smaller sizes with perhaps up to 2 kg in weight. In Mallorcan restaurants you will find a variety of Rape recipes, either as a Solomillo de Rape en Salsa, a Caldereta de Pescado with Rape mixed with other fish, or a Frito Mallorquin de Pescado y Marisco. You can also buy Higado de Rape (the Rape fish liver) and try your hand at a delicious Terrine de Foie de Rape without a feeling of guilt. The fish was not force-fed; in fact, Rape is one of the fish varieties that so far has resisted from being fish-farmed. 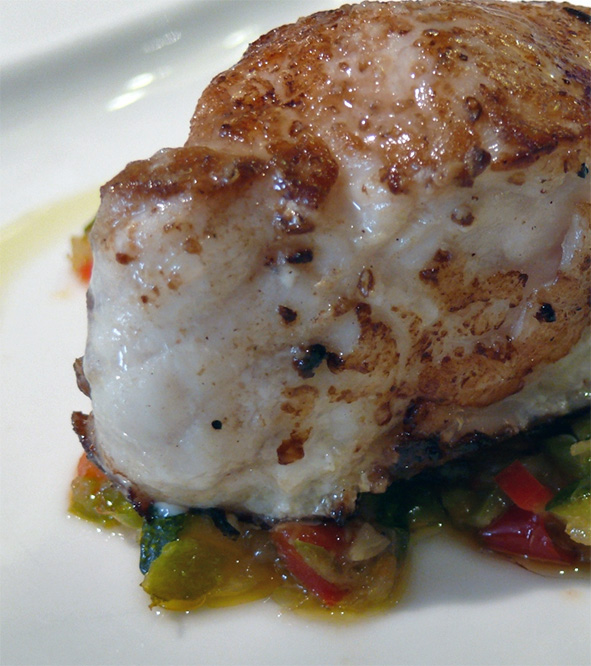 The photo (top) was chosen from my archive. It was taken in Palma de Mallorca, Baleares, Spain. The date: February 5th, 2005. The time was 13:51:30. The photo (bottom) was borrowed from the Internet, courtesy of gourmetymerlin.blogspot.com.

By mallorcaphotoblog
On November 24, 2011
3 Comments