The Celler Cooperativa in Felanitx is also known as Es Sindicat. The co-operative enterprise was founded in 1919. The factory building was constructed in 1921 and 1922, based upon plans by the architect, Guillem Forteza. In its heyday, the wine making co-op counted more than 500 socios (members). In the early years of the last century, Felanitx was the wine making capital of Mallorca, way ahead of Binissalem for instance, and Es Sindicat was raking it in. 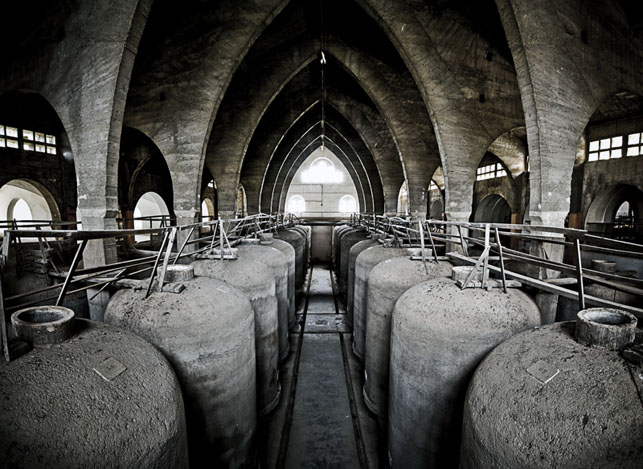 But the good fortune did not last forever. Just before the renaissance of Mallorcan winemaking, at the beginning of the 1990s, the bodega went into liquidation when bank debts could not be repaid. A bodeguero from Binissalem acquired the property in 1992 at an auction, being backed by British investors. Ever since, the town of Felanitx has been trying to buy the building back, with the help of the Consell de Mallorca, but the new propietario held out for an unreasonably high profit, I think, and a deal was never agreed upon.

In 2001, the Consell de Mallorca classified the Es Sindicat building as a Bien de Interés Cultural (BIC), a type of a heritage monument. Sadly, some of the glamour of the building is now defaced by graffiti and spoilt by vandalism.