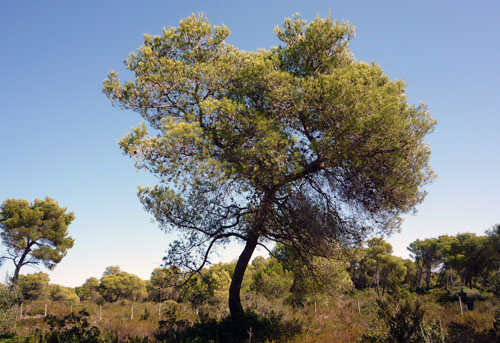 The Aleppo pine forms large expanses of forest, often together with other trees, such as wild olives and holm oaks. The pine’s bark is whitish and thus, distinct from the Pinus pinea, which has a reddish bark. In places where wind and salt are factors (coastal areas), the Aleppo pines adopt twisted, bent forms.

The Aleppo pine is not endangered, but it has two serious enemies: the pine shoot beetle (Tomicus piniperda) and the pine processionary caterpillar (Thaumetopoeidae pityocampa). Buggers.