The Art Of Falconry 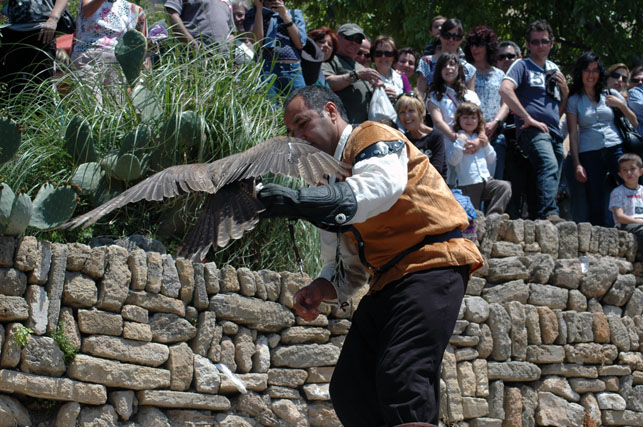 The art of falconry or hawking is an age old pastime, a sports activity and a hunting practice. Historically, falconry was a popular sport and status symbol among the nobles of medieval Europe, the Middle East and East Asia. My guess is that falconry was introduced to Mallorca by the Moors at around 1000 A. D. It is a well known fact that Rei Jaume I and his son, Jaume II de Mallorca, were avid followers of this hunting activity for the nobility; how much they were influenced by the defeated Moors is not really known.

Gonzalo Rodríguez is one of Mallorca’s foremost falconers. Gonzalo is based in Artà, but he gives educational talks and demonstrations all over the island. Every Wednesday, Saturday and Sunday, you have a chance to witness free flying demonstrations at the Castell de Capdepera. Admission there is free for the birds of prey exhibition but, entrance admission to the castle will be charged at 2 €.

Today, falconry in Mallorca is sometimes used at Palma’s airports to combat and scare away birds that might interrupt air traffic and to reduce the risk of birds striking with aeroplanes. Also, falconry is employed on the island to control animal overpopulation.