The Crocodile of Na Coca 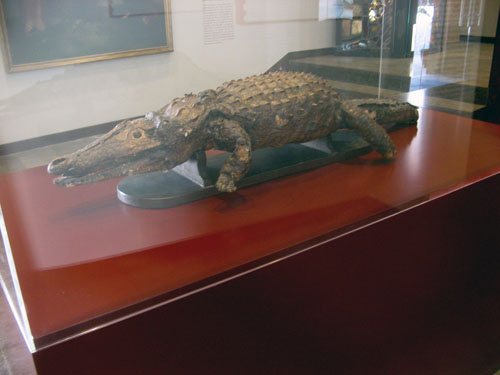 There are no crocodiles in Mallorca, as far as I know. It’s not the proper climate for reptiles, really.

Funny then, that there should be a mummified crocodile on permanent exhibition at the Diocesan Museum, right behind Palma’s cathedral.

One might suspect that a live crocodile was transported from a far away destination by boat, during the 17th century, and clearly destined for somewhere else better suited, when, for reasons unbeknown to me or anybody else, the alligator seems to have escaped from his or her cage on board and somehow made his (or her) way ashore and into the sewers of medieval Ciutat de Mallorca. A lot of commotion was reportedly caused by the animal after being spotted by the brave burghers of Palma, causing unease, fear, apprehension, fright and panic. The legend says that a brave man, one Bartomeu Coch, governor of Alcúdia at that time, took it upon him to kill the reptile so that it wouldn’t frighten his promised one any longer. Forthwith, the dead animal became known by the name of Drac de Na Coca.

I cannot promise that the story is true, but yes, I can assure you that the lifeless beast sits in a glass case at the Museu Diocesà in Palma, and can be admired for an entry fee of 3 € (or 1 €, if you can prove to be a resident). Opening hours there are Monday to Saturday from 10h00 to 14h00, if you should fancy going.

By mallorcaphotoblog
On January 12, 2009
2 Comments