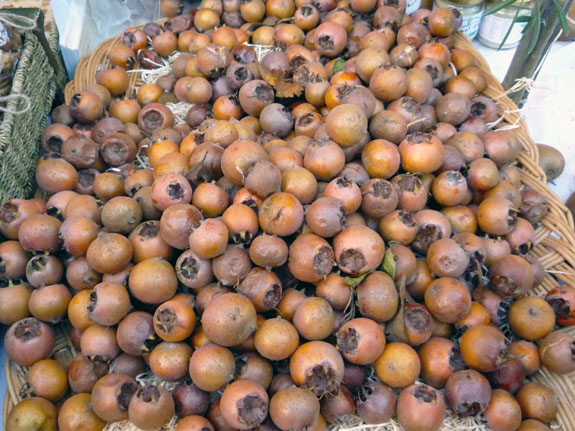 Anytime soon now, you will find an unusual, small fruit in Mallorca’s markets, the Nespro. Outside of Spain, this fruit is rather known as the Medlar (Mespilus germanica), but it is quite uncommon. The Medlar used to be an important fruit in times gone by but is very rarely cultivated today to my knowledge. A century ago one might have rounded off dinner with a glass of port, hazelnuts and a few medlars eaten with a spoon straight out of the skin.

The Medlar tree is not widely seen nowadays, even though it would be quite attractive in one’s garden. The fruit can be harvested in late autumn whilst still hard and then needs to be bletted before it can be eaten raw. This entails storing it, stalk end upwards, in a cool place for a short while until it is on the point of (but not quite) rotting, a state described as incipient decay. At this stage the flesh turns from white to brown, becomes very soft and is quite sweet with a delicious flavour that somewhat resembles a luscious tropical fruit. Nespros can be eaten raw or cooked and would make a nice jelly due to the high concentration of pectin in them, to be eaten with roast pork, for instance. Apparently, the Medlar are also used in the winemaking process, but I am not sure that this is the case in Mallorca. I will have to find out.