I never thought that I would ever do a blog entry on the fallout of some volcanic eruption as far away as Iceland, but here we go.

Mallorca, as well as its Balearic sister islands, has been deeply effected by the cloud of volcanic ash across Europe’s skies, ever since that fatal eruption of volcano Eyjafjalla in Iceland last Wednesday. Hundreds of flights have been cancelled over the last four days, flights departing from here as well as flights destined to the Balearics. But with all the turmoil going on, there was some air traffic coming to and going from Son Sant Joan PMI airport, as you can see from my photograph taken last Saturday afternoon near Sencelles.

The Air Europa plane shown above will probably have arrived from a domestic destination. Quite a few of those got through in the course of the last few days. However, yesterday Son Sant Joan was shut down completely for about six hours. In all, there were 507 flights scheduled for yesterday, but 431 of these were cancelled altogether and only 43 flights got out before the airport was closed.

Looking at the image (below) you can see how badly Spain and even parts of the Mediterranean were effected yesterday afternoon, including the Balearic Islands. 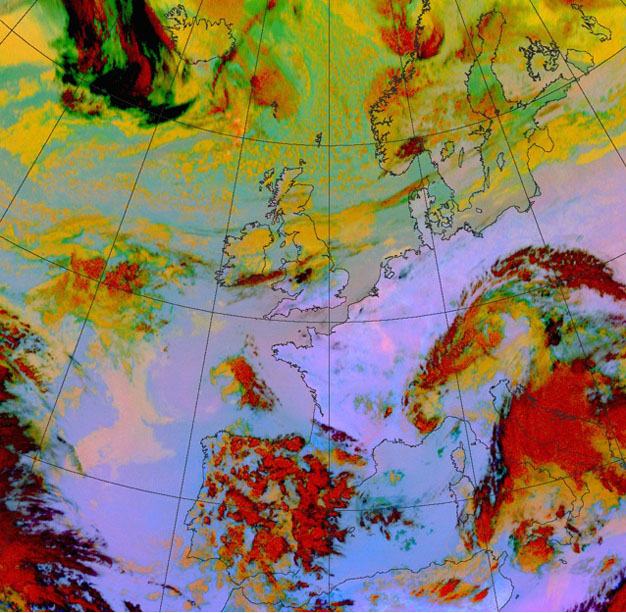 The bad news is that the penultimate eruption of Eyjafjallajökull lasted for almost two years from 1821 to 1823. No air traffic was effected then for the simple fact that aeroplanes had not been invented yet, nor had satellites nor the Internet. Let’s hope this time round the volcanic ash plumes won’t last quite that long. Otherwise, we might all have to change our way of life.

The photo (top) was taken near Sencelles, Mallorca, Baleares, Spain. The date: April 17th, 2010. The time was 15:10:15. The chart (bottom) was taken from the Internet. My thanks go to metoffice.gov.uk. Thank you very much.