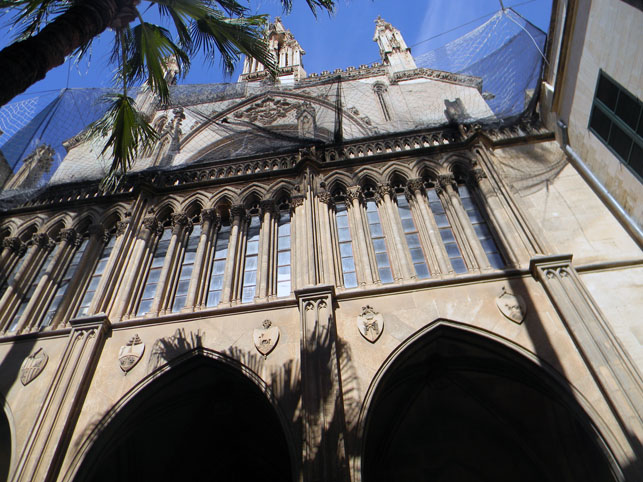 I must confess to being a bit of a nerd. I do not actually indulge in train spotting or some such frivolity nor do I collect moths and butterflies, nor precious stones and minerals. But, I do confess to a habit of doing some church spotting. I love churches even though I am not a member of any known confession. I adore churches, chapels, monasteries, convents, cathedrals, oratories, synagogues, mosques, temples, you name it. Once upon a time I even was the proud owner of a small church hall somewhere in the depths of the English countryside.

In Mallorca, I reckon there must be in excess of 200 church buildings, chapels and what have you. I have not been to all of them yet, nor have I been inside all of the ones that I know from close quarters. But, it always gives me great joy and satisfaction to be able to add another church, chapel or monastery to my collection of places of worship here on this lovely island. And so it was when, last week, I finally stumbled upon the Església del Seminari (Old Seminary Church).

The Església del Seminari is a bit mysterious in as much as not many people know that it exists right in the heart of Palma’s old town and even fewer have actually seen it from close up. The church forms part of the Old Seminary in Carrer Seminari, itself a continuation of Carrer Monti-Sion. You can hardly see the Església del Seminari from the outside, and the entrance to the temple is well shielded away from the public eye, being accessible only through a patio (courtyard) that forms part of the Seminari building. The Seminary complex is where, in years gone by, priests were educated and prepared for their professional calling. Then, it was handy to have a church on the premises. Initially, the church was a smaller chapel but, around 1894, the actual Seminary Church was built. I am not sure that one is allowed to access the Seminari‘s courtyard. Instead, I took my chances when I saw an open gate to the Biblioteca Diocesana de Mallorca and simply sneaked in. The Biblioteca in Carrer Escoles is open Mondays to Fridays, 10h00 to 14h00, and some afternoons as well. From there, I simply tiptoed into a different courtyard and there it was, the portico of three-pointed arches of the Església del Seminari, a beautiful building judging from the parts that I could see. Its portico certainly is splendid and its portal doors are sublime.

I was not able to enter into the church, though. The temple fell into disuse a few years ago, since the Seminary no longer needs to educate any more priests. Thus, the church was vacated and all its valuables were handed over to the Museu Diocesà de Mallorca. No more church services are being held there either. Last year, the Seminary Church underwent some kind of architectural restoration work.

I very much do hope to one day be able to see the church from the inside. If ever I do, I shall let you know.