The Crossley Engine In Binissalem 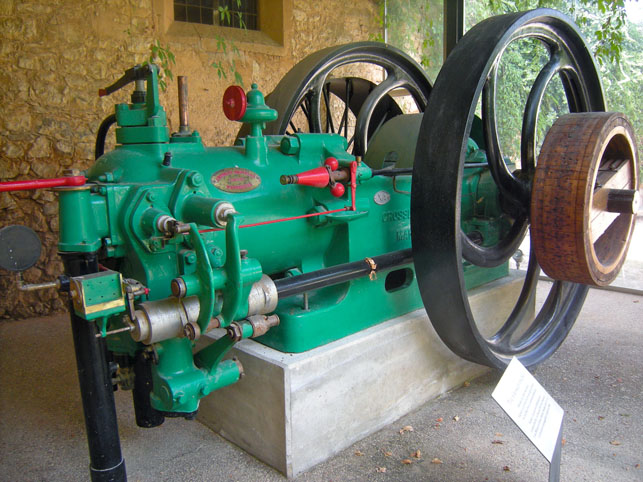 We sometimes find it hard to perceive that some technological achievements have not always been with us. Take refrigeration as an example, telephones or, simply, electricity.

I do not know when electricity first came to Mallorca but, I do know that at the beginning of the 20th century, electricity and lighting were produced on this island privately and on a local basis. Take a place like Binissalem, for instance. Here, an engine manufactured in Manchester by the Crossley Brothers Ltd. Company was purchased by the Can Pedro Ferrer factory, purveyors of electricity for the benefit of this pueblo in the early 1910s. I am not quite sure but, I think we have a gas fuelled atmospheric internal combustion engine here. Crossley of course is better known for their engines for Leyland buses as of 1905 and for their contribution to manufacturing with the introduction of the production line. It is said that the Crossley system even influenced Henry Ford. In 1904, Crossley started producing automobiles and, later, aviation engines. Two Crossley engined light-trucks went on the so-called Court Treatt expedition, the first to drive a motor vehicle from Cape Town, South Africa, to Cairo in Egypt. The party of six people set off in September, 1924, and reached Cairo sixteen months later in January, 1926, having covered 12,732 miles (20,500 km). Car production at Crossley’s came to a halt in 1937. The aircraft motor facility eventually ended up producing aviation engines for the Rolls-Royce Industrial Power Group until 1995.

The engine in Binissalem was busy producing electricity until the late 1950s. By then, electricity in Mallorca was manufactured by the coal-fired power station in Alcúdia and supplied island-wide. The Crossley engine was hence donated to the Ajuntament in Binissalem, who duly restored it in 2002 and put it on permanent exhibit, albeit rather well hidden, in Binissalem’s Parc de sa Rectoria. So, there.