Haute Couture, Made in Calonge 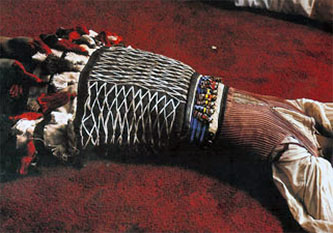 This may or may not interest you. I am writing about it because things like the following interest me.

There is a small village between Felanitx and Cala d’Or with probably the world’s highest concentration of fashion designers. The pueblo is called Calonge; it belongs to the jurisdiction of Santanyí. Calonge has no more than perhaps 980 inhabitants, but, hey: Calonge is home to two of the more eminent fashion designers that the world of Haute Couture fashion has seen over the last 20 years or so.

The older one is called Miquel Adrover (1965). He went to New York in 1995 and started designing his own woman’s fashion collection in 1999. Between then and 2004, he presented eight collections in NYC (see photo above). He was nominated for the Vogue Fashion Award in 2000 as the best avant-garde designer of the year. Some of his fashion designs are held in the V & A Museum in London, the Metropolitan Museum in New York, the Bellevue Art Museum in Washington and the Museo Nacional Reina Sofía in Madrid. In the aftermath of 9/11, Miquel Adrover abandoned the US market and returned to Europe. He currently works and designs for a German fashion label, Hess Natur.

The younger one’s name is Sebastian Pons (1972). He went to London in the 90s to study at the Central Saint Martins College before he started to work for Alexander McQueen. In 2003, he joined Miquel Adrover’s team in New York, where he debuted in 2004 with a collection during the New York Fashion Week (see photo bottom). Later this week, Sebastian Pons will travel to New York where he will present his latest designs during the New York Fashion Week, all hand-tailored in Calonge by friends and family members. My wife and our younger daughter were shown some of his latest creations yesterday. I wasn’t there and no photo of the recent designs can possibly be published until after the NYFW presentations.

Both photos shown today are of fashion designs from the 2004 and 2005 collections, respectively. The images were borrowed from the Internet, courtesy of migueladrover.com (top) and thefashionspot.com (bottom).