I went to the theatre in Manacor last night, to see Acorar by Toni Gomila. It was a bit like The Vagina Monologues but instead of sexual tribulations it was about Mallorca’s favourite pastime, the Matança (slaughtering the pig). I liked the one-man monologue performance very much even though it was in colloquial Mallorquín and not always easy to absorb. But the show was very well acted and well set-en-mise. The house was packed; apparently Manacor has quite a long-established theatre tradition. If you should happen to like the native idiom and favour a passionate discourse about some essential Mallorcan character traits, you can line up for tickets in Capdepera (January 27th), Santanyí (January 28th), Manacor (January 29th), and soon in Lloseta, Artà, Porto Cristo, etc. (February dates to be confirmed). The author is performing the clever script himself.

I was disappointed though for a different reason. I had imagined that the performance would be given at the new auditorium in Manacor, inaugurated only recently. I am feverishly up in arms against the idiocy of building a new theatre cum concert hall facility in a place like Manacor when the very town has a superbly equipped and well-functioning theatre with four salas of different sizes and capacities, only built some 20 or 30 years ago. Apparently, the new auditorium has cost 6,000,000 €, not including the usual cost overruns, and excluding the technical installations. It may be for this technical deficiency that The Matança Monologues had to be put on at the old theatre. Now Manacor has a multi-million venue which they can’t use until La Crisis is over and done with. Politicians are very good at wasting the taxpayers money and in getting their priorities wrong, again and again. Idiots. 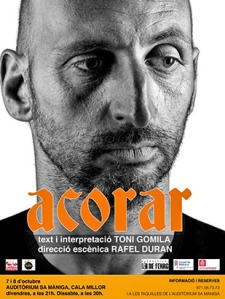