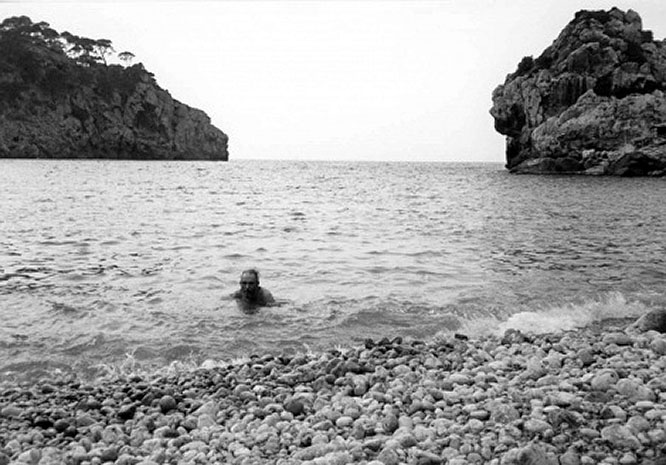 It is said that Andy Warhol once stated ‘My favourite painter is Mati Klarwein’.

With hindsight, Mati Klarwein and his paintbrush probably expressed the Zeitgeist of the Sixties and Seventies better than any other artist.

Mati Klarwein painted surrealistic LP covers for a number of musicians. His record covers of Santana’s Abraxas and Miles Davis’s Bitches Brew are perhaps more widely recognised than their musical content. These and other images became icons of Flower Power, hippiedom and the Sixties in general. Mati Klarwein was considered by some the King of Pop, at the time.

He also created surrealist portraits of Brigitte Bardot, John F. Kennedy, Richard Gere, Leonard Bernstein and Michael Douglas, to name but a few. Jimi Hendrix and the prophet of LSD, Timothy Leary, counted amongst his friends.

Mati Klarwein (1932-2002) was born in Hamburg, Germany, but in 1934 emigrated with his Jewish parents to Palestine before the state of Israel was created. In the Fifties, Klarwein lived in Saint Tropez (France) and in the USA, before eventually retreating to Mallorca in 1985, where he painted untiringly. Klarwein died in Deià (Mallorca), in 2002. His tomb can be found at the parish churchyard there.

‘I grew up in three different cultures, the Jewish, Islamic and the Christian. These circumstances and my family’s stern resistance to being part of any kind of orthodoxy has made me the outsider I am today and always have been’, Mati once said. ‘I am only half German and only half Jewish with an Arab soul and a African heart’.

In New York in 1964 Klarwein, by then Abdul Mati Klarwein, caused a commotion after having exhibited his blasphemous painting Crucifixion (see image below). The motif of the painting of a myriad of people caught in a garden of earthly delights, where no sexual, racial or gender barriers are in evidence, was something that threw parts of society into such a rage that Klarwein, at one point, was even attacked by a man violently chopping the air with a huge axe.

It seems that because of his association with the unorthodox, with mind-expansion, drugs and surrealism, Klarwein never became part of the established art scene. His paintings are scattered all over the world, but are rarely seen in art exhibitions. There was one large retrospective of his work in Palma a few years ago, followed by a remarkable book called ‘Mati Klarwein’ and sponsored by the Consell de Mallorca. This lavish book about the artist is still on sale for 50 €.