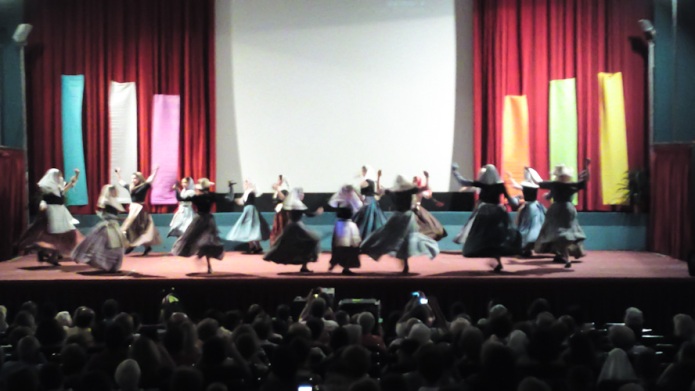 When you live in a community and try to be part of it, at least to some extent, it helps if you like what that community is doing. As it happens, I like Mallorcan traditions, their music, folk dance, food, festivities, rituals, customs and celebrations. I particularly like Ball de Bot, a group dance typical of the Illes Balears.

It is said that Ball de Bot came to Mallorca and the neighbouring islands with the conquest, during the 13th century, even though there have been suggestions of a Moorish origin as well. Ball de Bot comes in five categories, all different in speed, beat and formation, such as Fandangos (a sort of courting dance), Jotas, with roots in Aragón, Boleros, Mateixas and Copeos. The Mateixa is a fast-moving dance similar to a Jota and is specifically at home in the Eastern parts of the island, the Llevant de Mallorca, where I live. All Balls de Bot are typically performed in the traditional Mallorcan farmers’ festive outfit (see photo).

Escola de Ball Es Convent, the Ball de Bot dance school in Felanitx, had their Fin de Curso presentation yesterday. The youngest group was made up of three and four-year olds, with the odd two-year old thrown in, and then up in age and rising through groups of school kids, adolescents, young adults and the slightly more mature grown ups. The truly middle-aged adults and even older ones were not performing because they don’t seem to need to learn the Balls any longer. They have all practiced Ball de Bot from an early age, I suppose. One of our daughters danced with one of the groups; she is a young adult in case you want to know.

There are dance schools for Ball de Bot virtually everywhere in Mallorca, should you want to try to learn the art of Fadango et al.