The Monument Of Crist Rei 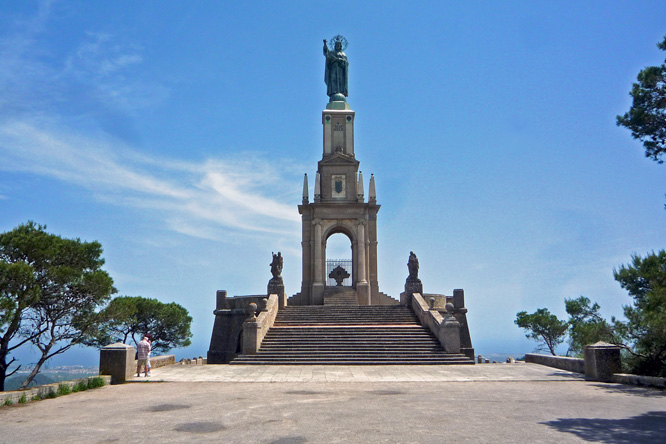 If you know Felanitx, you probably also know the Santuario de la Mare de Déu de Sant Salvador (Monastery of Sant Salvador), some 7 km away from the town. From the distance, one can soon make out the towering monastery building sitting on top of the Puig de Sant Salvador mountain, together with the enormous monument of a Christ figure. The monument of Crist Rei (Cristo Rey) in Felanitx is not quite as imposing as the Cristo de Corcovado in Rio de Janeiro, Brazil, but they both manifest similar proportions and a comparable religious motivation. To be precise, the Brazilian sculpture measures 30 m on top of a 9 m high pedestal, whereas the proportions in Felanitx are the other way round: 7 m of Christ on top of a 37 m tall support. The massive monument in Rio was constructed in reinforced concrete from 1922 to 1931, whilst the Mallorcan monument was built between 1928 and 1934.

The Crist Rei statue was not always liked by the people of Felanitx due to its stark aesthetic contrast with the austere authority of the much older monastery. The statue was sculpted in bronze by Mallorcan artist, Tomàs Vila Mayol (1893-1963). Two generations later, the Crist Rei statue is accepted and, in fact, venerated by the Felanitxeros.

By mallorcaphotoblog
On October 21, 2011
2 Comments