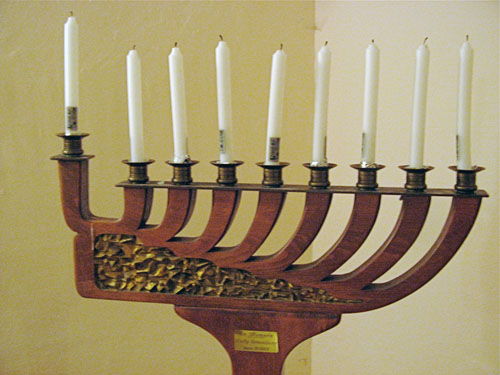 The relatively small Jewish community in Mallorca will tonight light a candle on the right side of the Menorah (candelabrum), on the first night of Chanukah, the Festival of Lights, also the Festival of Dedication. The Chanukah lights are lit in the evenings preceding each of the eight days of Chanukah beginning with Sunday, December 21st, 2008, i. e. today.

On the following night, a second light is added to the left of the first as one kindles the new light first, proceeding from left to right, and so on each night.

The lamps or candles must contain enough fuel, at the time of the lighting, to burn until half an hour after nightfall (nightfall is defined as the point at which it grows dark enough for three average-sized stars to be visible, about 20 to 30 minutes after sunset, depending on the location).

The lamps or candles should be arranged in a straight row and should be of equal height. The Shamash, the servant candle that kindles the other lights, should be placed apart from the rest (higher, or outside the row).

Of course, there was a time when the number of Jewish people in Mallorca was a much more significant one, just over 500 years ago. Sadly, many of them were coerced into converting to the Catholic faith, whilst others had to flee their home and their country, and many were burned at the stakes. Until today, such converts are called Xuets by the Mallorcan people, an expression often used in a derogatory way, even now.