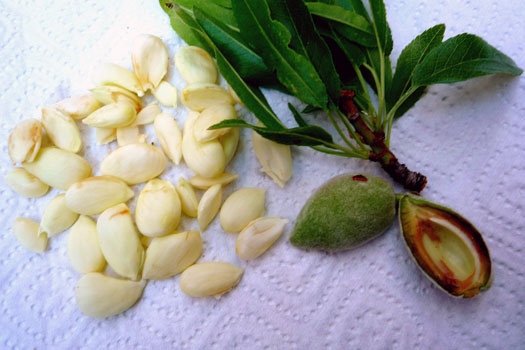 On a walk in the Mallorcan countryside you will now see the almond trees carrying a rich supply of ametlles verdes (green almonds). Green almonds are unripe almonds, picked before the shell has had the time to harden, and before the almond kernel inside has had a chance to become crisp and mature.

In some local markets you can find green almonds on offer, perhaps not now, but definitely in a week or two weeks time. As green almonds are only available for about four weeks each year, they are often overlooked, or they are considered too hard to find. Green almonds are used in the Mediterranean cuisine (Spain, France, Italy, Greece, the Middle East, North Africa, even in Russia and the Ukraine). The entire green fruit can be eaten, unless you prefer to just nibble the semi-liquid kernel inside.

I have found some nice green almond recipes on a blog specialising in 18th century French cooking. Have a look and let yourself be inspired.