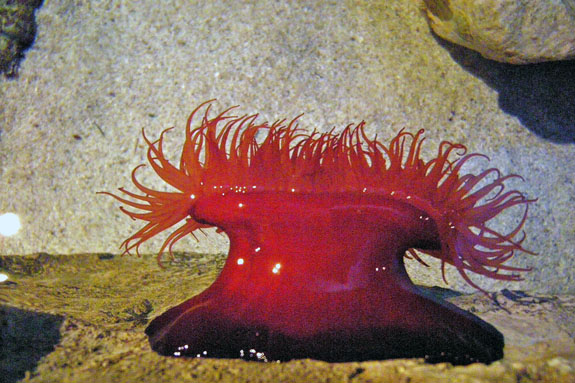 The Mallorcan tomàquet de mar (Actinia equina) could roughly be translated as a Sea Tomato, however, there is no such thing in the English vocabulary. Instead, Wikipedia lists this sea anemone as the Beadlet anemone. A sea anemone is a polyp of the cnidarians group of creatures. Sea anemones are closely related to corals, jellyfish, tube-dwelling anemones and Hydra.

The Actinia tomàquet anemone polyp lives in the Mediterranean Sea. It exists in exuberance in the area of the archipelago of Cabrera, where it lives in rock pools on the shore and in the shallower parts of the sea below low tide level. The creature feeds on small crustaceans, zooplankton and worms. Each of its tentacles can sting and catch small prey.