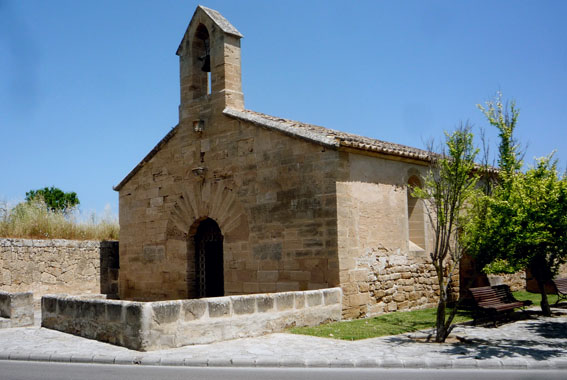 The Oratori de Santa Anna just outside of Alcúdia (bang opposite the town’s cemetary) is thought to be the oldest surviving church in Mallorca, dating from the early 13th century. Of course there is Son Peretó near Manacor from the 7th century, but that is a complete ruin. And in Palma we would have the Arab mosque dating from the 12th century, if that had not been destroyed in a callous fashion by Jaume I and his troops.

When the Catalan conquerers arrived in Mallorca in 1229, they decided that it was best to show their gratitude to the deities by building not only the Catedral in Palma, but also a number of smaller oratory chapels throughout the island. In the case of Santa Anna, the neighbouring site of Pollentia offered a welcome supply of building material.

The chapel of Santa Anna is built in the Gothic style of the time as can be seen from the three pointed arches carrying the simple roof construction.

I must have driven past this little temple some thirty times or more, over the years, but I have never found it open. Until last week that is. When I drove past then, I couldn’t believe my eyes: the doors were open and I could enter the chapel for the first time ever. I really enjoyed my visit.

I have since been told that Santa Anna is always open in the mornings. Let’s see if you get your timing right in case you should want to go.

By mallorcaphotoblog
On June 3, 2009
2 Comments