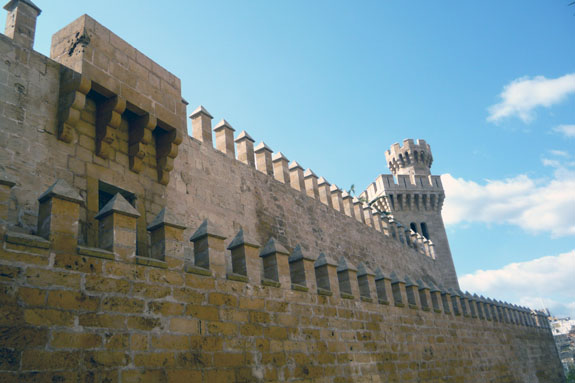 One of the oldest buildings on the island has to be the Palau de l’Almudaina in Palma. Obviously, there are ruins of buildings even older than the Almudaina here in Mallorca, but of the buildings still intact and used on a daily basis, the old Moorish Citadel in Palma most likely qualifies as one of the oldest.

Sadly, what one sees today is in most parts not the original building, far from it. The original fortified palace was built as a residence for the Wāli (the Moorish governor) at the turn of the 10th century. After the Catalan conquest the Almudaina was rebuilt and extended during the 13th century, preserving large parts of the Moorish Citadel and also, modelling the palace in Palma on a similar castle, the Palau dels Reis de Mallorca in Perpignan (France). More alterations were committed during the 19th century, and even more during the early 20th century. Then, the wall at the north side, along the steps that lead up to the Cathedral, was altered and the original Torre dels Caps (Tower of the Beheaded), shown here, was rebuilt, again in the style of a tower in Perpignan. This Torre dels Caps was cleaned up and repointed a year or two ago. Finally, during the Sixties, more alterations tried to model the Palau de l’Almudaina on the ideal of a Gothic castle, perhaps in a questionable way.

Today, part of the Almudaina Palace is run as a museum and can be visited (free on Wednesdays for residents of any EU country) but, sadly a very large part of the castle can not be visited. This off-limits area of the Palau de l’Almudaina is used by the Spanish Military as the Headquarters of the Armed Forces in the Balearic Islands.