The Greater Flamingo (Phoenicopterus roseus) is native to Spain. In Mallorca, the bird prefers the shallow salt pans of the Salines de Llevant near the coast for its natural habitat during the Winter months, becoming most apparent in the evening. This Phoenicopterus species can be found here as early as October and as late as April. Salines de Llevant is classified as an ANEI (Àrea Natural d’Especial Interès), a Nature Reserve. The area is attractive not only for bird watchers but, also for its general natural beauty. We undertook a very rewarding walk yesterday, taking us from the Banys de Sant Joan de la Font Santa, past the salt factory, the salinas, the forests of pine and juniper trees, and the dunes to the Platja des Trenc, and back again. 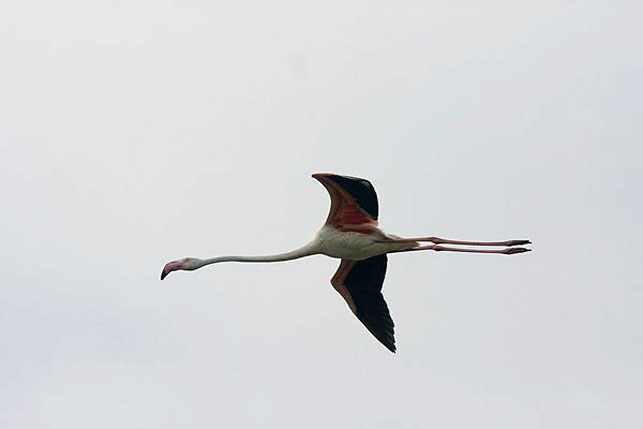 The photo (top) was taken near Ses Salines, Mallorca, Baleares, Spain. The date: October 4th, 2010. The time was 15:18:19. The photo (bottom) was borrowed from the Internet, courtesy of cinerea.org and the photographer, Ricardo Rodríguez.