The San Antonio celebrations are coming up any moment now, possibly constituting the single most important traditional festivity on the island (Festa de Sant Antoni, in Catalan). More about Sant Antoni in a day or two but first, let me alert you to a particular and rather spectacular celebration that goes on in Pollença at this time of year, the Pi de Ternelles madness. 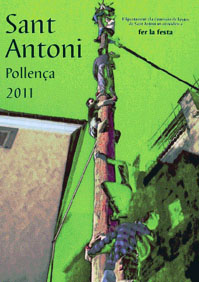 Two days ago, a huge 21 m pine tree was chosen and felled on the estate of Son Ternelles, the property of the heirs of the March family, near Pollença. Next Monday, January 17th, the large tree trunk will be hauled back into town at around lunchtime in a cheerful orchestration, involving the pueblo‘s younger generation, lots of Mezclat (a sweet and powerful alcohol concoction), plenty of xeremiers piping music plus the occasional fire rocket. The pine tree will be erected next to Pollença’s parochial church in Plaça Vella where it will be soaped before, on the evening at around 20h00, the male village youth will be competing to climb up the tree trunk to claim the trophy. The colourful proceedings should be televised live on TV, as always. 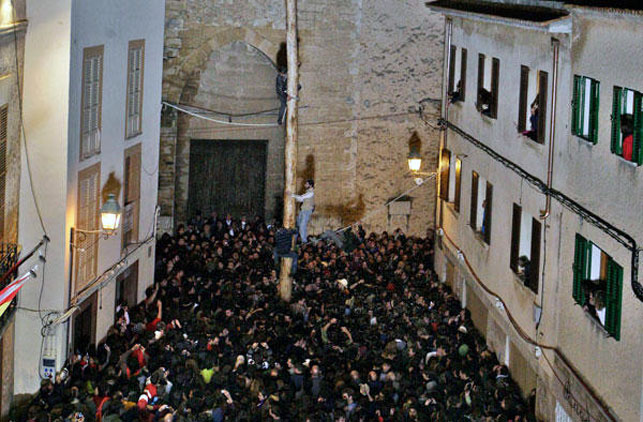 There is a separate Pi de Sant Antoni jamboree in Port de Pollença. A tall pine tree will be found and cut down on the Peninsula de Formentor and be brought back to Port de Pollença by boat. Festivities including the tree climbing extravaganza are scheduled in Port de Pollença for Monday at around lunchtime. The feel of the celebrations in Pollença’s port is quite distinct. The event is less crowded there, alcohol seems to be consumed in lesser quantities and the daytime conditions make the gathering somewhat less claustrophobic. If you have been to neither of the Pi de Sant Antoni events, I would suggest you should sample the one in Pollença but, if you already know that one why not go to Port de Pollença this year for a bit of the other Mallorca?