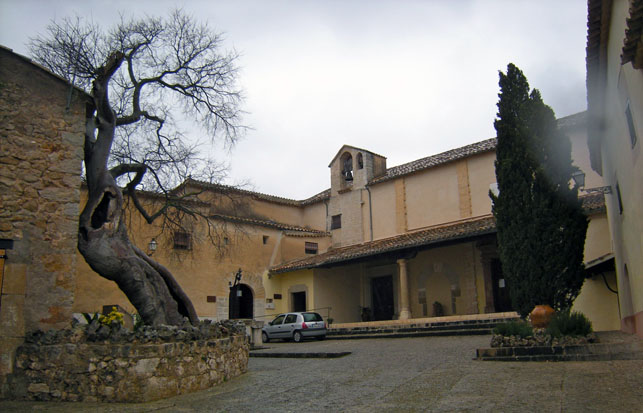 I can’t think of many reasons why one should pay the town of Inca a visit, other than buying a pair of shoes or a leather jacket. There’s the weekly market every Thursday and the annual Dijous Bo, and there are the half a dozen of Cellers (Can Amer, Can Ripoll, Sa Travessa, to name but a few) but they have turned rather pricey of late. There’s the rather impressive Església de Santa Maria la Major (open for Misses daily at 19h30, as well as 08h30 Monday to Friday, and 09h00 to 12h00 on Sundays. Times vary slightly in July, August and September). And there is the Hospital Comarcal d’Inca, but it would be better if you kept in good health and did not have to go to any hospital, wherever. Other than that, Inca is really a place where one passes through on the way up to Caimari and on to Lluc, or on the way from Palma to Alcúdia and Pollença.

If you should be into matters of serenity you might be attracted by one or other of Inca’s monasteries. There are three as far as I can make out, the Convent de Sant Francesc, the Claustre de Sant Domingo and the Monestir de Sant Bartolomeu. The first one is difficult to get into, the second one is not a monastery any more but, is now owned by the town hall, whilst the third is the oldest one and still home to a number of nuns from the order of the Jeronimes. This is a closed order which means you cannot get into the inner sanctum but, the baroque church is open to the public during church service hours (07h45 on weekdays, 09h00 Saturdays and Sundays). I find this monastery to be particularly serene and peaceful. Somehow it is a place that one does not expect to find in a place like Inca. One can get into the outer patio and into some parts of the monastery where there is a permanent exhibition of church paintings from the 16th century, in particular of Mateu Lopez senior and Mateu Lopez junior, both amongst Mallorca’s most prominent painters during the 16th century.

There is also a small and tranquil ermita just outside of Inca, the Ermita de Santa Magdalena, dating from the 13th century and offering splendid views (photo below).

The photo (top) was taken in Inca, Mallorca, Baleares, Spain. The date: January 27th, 2011. The time was 13:19:21. The photo (bottom) was taken from the Internet, courtesy of balearsculturaltour.es.