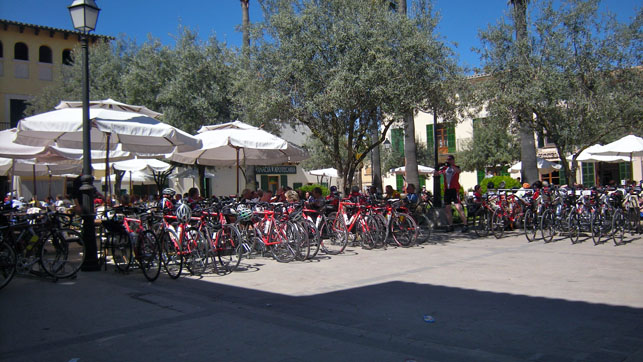 It shames me considerably to have to admit that I am somewhat cyclophobic.

I do agree that Mallorca offers an ideal location for cycling excursions. Its varied landscape from the flats of Campos to the mid-sized hills of the Llevant and the Pla, and the demanding challenges of the Serra de Tramuntana must come close to Paradise where the heart of a cycling enthusiast is concerned, or so I imagine. And there are hundreds of miles of secondary roads signposted as cycling routes, plus there are considerable lengths of cycling tracks in and around Palma. Mallorca offers, in parts, a year-round Tour-de-France environment en miniature and tens of thousands of cycling tourists make the most of this enticing temptation. Where the would-be Armstrongs go wrong, though, is the small matter of the Highway Code. During the Tour de France or any some such cycling race, roads are off-limits for the rest of the traffic. Not so in Mallorca. When the cycling hordes invade this island every year during springtime, the regular traffic continues. Roads are not being cordoned off for the cycling enthusiasts. Traffic incidents are provoked. Rage gets incited. Accidents do happen all too frequently. Between January and April 2011, 160 road accidents involving cyclists have been reported in the Illes Balears so far, including three deaths. That’s 15 accidents in January, 23 in February, 65 in March and 57 in April. One must simply fear for the numbers to accumulate month after month, year after year.

I do not plead for a ban on cycling on Mallorca’s roads but, I would appeal to the common sense of any and all of our visitors to simply adhere to the rules and regulations that at home they so willingly accept. I am simply concerned for our well-being and safe-keeping, theirs as well as my own.