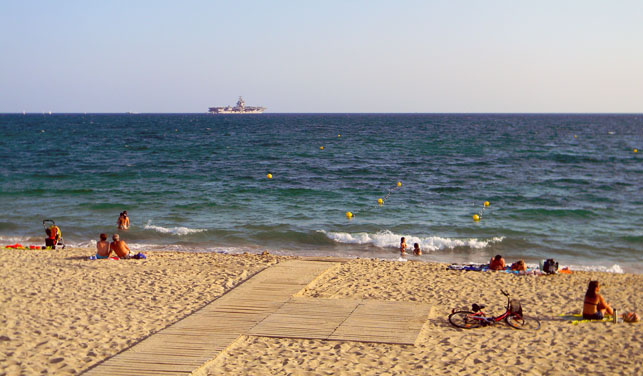 By the time you read this, the USS Enterprise (CVN 65) aircraft carrier may have left the bay of Palma de Mallorca, where she arrived last Tuesday with some 6,000 sailors and marines on board. Not so long ago, perhaps twenty years back, it was quite common for US navy ships to dock in Palma, much to the delight of Mallorcan shopkeepers, taxi drivers and the girls in Palma’s Barrio Chino (red-light district). But since the first Gulf War, US marine operations have been based in the Persian Gulf, and visits to our shores have since become infrequent and few and far between. USS Enterprise had last been to Palma in 2001, when she visited on her voyage to the North Arabian Sea as part of Operation Enduring Freedom.

USS Enterprise was the world’s first ever nuclear-powered aircraft carrier. She was built in 1961 and entered service in November 1961. Her first big showdown was in October 1962 in Cuban waters, setting up a quarantine as part of the Second Fleet. This year, the ship celebrates its 50th anniversary. Until today, USS Enterprise is the longest aircraft carrier around with 342.3 m in length, a sleeve of 40.5 m, a draught of 11.9 m and with a displacement in maximum load of 93.284 tons, attaining speeds of some 30 knots. The ship was built by the Newport News Shipbuilding and Drydock Company and is currently the oldest ship in service of the US Navy. She is unlikely to come back to Mallorca anytime soon, as USS Enterprise is slated for decommissioning or retirement in 2013. When visiting Palma, USS Enterprise was carrying 20 F14 Tomcat aircraft, 36 F/A-18 Hornet fighter jets and 4 Sea Hawk helicopters.

When USS Enterprise leaves Mallorcan waters, the 257 m long USS Bataan, an amphibious assault ship, is expected to arrive in Palma’s waters for a visit.

The photo (top) was taken in Palma de Mallorca, Baleares, Spain. The date: July 1st, 2011. The time was 19:21:11. The photo (bottom) was borrowed from the Internet, courtesy of wikipedia.org.

By mallorcaphotoblog
On July 3, 2011
8 Comments