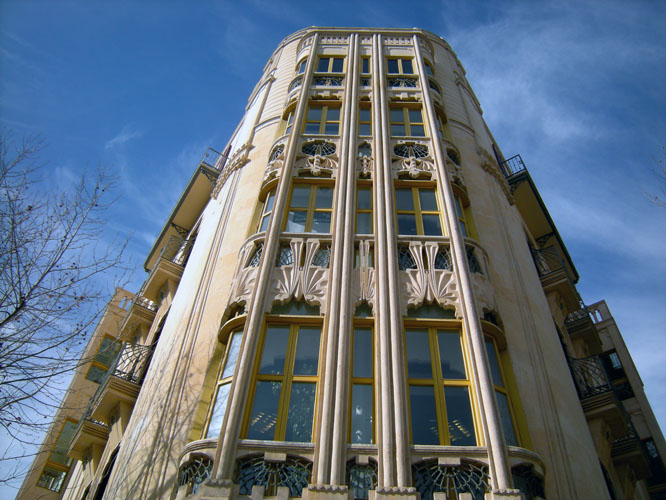 We are lucky here in Mallorca to be surrounded by a large number of buildings in the style of Modernisme, sometimes also called Catalan Modernism. The name is not only applied to architecture but, is a bit of a catch-all for a variety of artistic and cultural manifestations, such as design, pottery, sculpture, etc. Modernisme is often seen as a Catalan equivalent of and parallel to other European fin-de-siècle art movements, such as Symbolism, Decadence, Art Nouveau or Jugendstil. The Modernisme movement spread from the city of Barcelona, and its best-known exponent in architecture was Antoni Gaudí.

In Palma, for instance, we can find the Gran Hotel, the Casasayas building and its twin, the Pensión Menorquina, Can Rey and its neighbouring building, Almacenes El Águila, Can Barceló or the building in today’s photo whose name or architect I was unable to find out for you. The building can be found where the Avenidas meet the Calle 31 de Diciembre. Buildings or cemeteries in the Modernisme style can also be found in other pueblos, such as Sóller, Felanitx, Pollença and Inca.

Postscript: The building in the photo is called Can Segura and it was constructed in 1908 by Francesc Roca i Simó.