The young lady in the photo (above) is called Teresa Planas. She was born in Pòrtol (Mallorca) in 1987. She has now made her home in Barcelona where she studies Political Science at the Universitat de Barcelona. Last Sunday, young Teresa set off from Cala’n Bosch at Cap d’Artutx in Menorca to cross the Canal de Menorca (Menorcan Channel), swimming to Cala Mesquida in Mallorca. The shortest distance between the two islands measures some 21.3 nautical miles (39.8 kilometres).

The arduous swim was well prepared. The task had been in the planning for two years already, since 2009. Earlier this year, Teresa participated in the Alcúdia Formentor Xtreme Swim competition (5 nautical miles; 9 kilometres) and the non-competitive Cabrera Ultra-Open-Water Challenge to Sa Ràpita (13.5 nautical miles; 25 kilometres). Last Sunday, the start time for the Menorcan Channel swim was set at 04h00. Planas had estimated to make the crossing in between 14 and 16 hours but, in the end only took 12 hours 18 minutes and 42 seconds, thus beating the record on this difficult crossing. The previously best time had been set at 12 hours and 19 minutes by Miquel Sunyer in 2009. Kendall Mellor (UK) was the first person to ever undertake the Menorcan Channel swim in 1968 with a respectable time of 16 hours and 18 minutes. Teresa Planas was the first person from the Baleares and only the seventh person ever to swim this particular distance. Bravo. What an incredible achievement. The swim was done in aid of the Asociación Española Contra el Cáncer (Spanish Support Association Against Cancer). 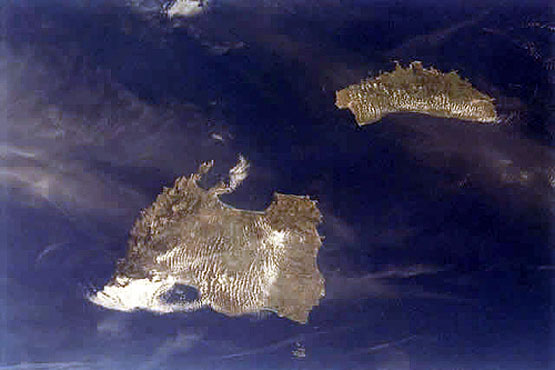 The photos were borrowed from the Internet, courtesy of diariodemallorca.es (top) and fabian.balearweb.net (bottom).