Sometimes it can take quite a while to get the photo opportunity you want. I had been trying to get into the Convent de Sant Agustí in Felanitx for well over a year. I wanted to have access to the Claustre that I had heard about.

A few days ago my wish was finally granted. I was given a tour of the convent and its church, which was declared a Bien de Interés Cultural (a property of cultural heritage status) in 2007. The monastery and the church were built in 1673 by monks of the Order of Saint Augustine. In 1821, the frailes (monks) were expelled from the convent, however, for reasons unbeknown to me. In 1823, once the Constitution was abolished, the monks returned to the convent. In 1835, the expropriation was confirmed and made definitive. in 1844, the local Government auctioned the church property for 139,000 Reales (a Real was a silver coin). Finally, in 1901, the Catholic Church managed to buy the convent back for 125 Duros (1 Duro had the value of 5 Pesetas).

Today, there is no Claustre and perhaps there never was one, in the shape that I had expected it to be in, e. g. a cloister on the ground floor. Instead, what one calls a Claustre here is in this case a gallery open to one side on the first floor (see photo top) from where doors lead off into the rooms or monks’ cells.

I was allowed to enter the organist’s tier. I am not sure who the organ was built by but, I believe the instrument to be from the 17th century. When I heard the organ played some time ago, it had a clean sound but, if there was money, it could well do with a proper clean-up and some general restoration.

I also had a chance to climb up the Campanario (bell tower, see photo centre and bottom) from where I could wave over to the domineering bell tower of Sant Miquel, the Felanitx parish church. I was told that no-one had climbed up to the church bells in twenty or thirty years, other than the electricians wiring the bells’ mechanism to the electric current and the foundry people when one of the bells had to be exchanged.

On Sundays, a church service is held in the church of Sant Agustí in Castellano, the only one to be held in that idiom anywhere in Felanitx. Last Sunday, a collection was held for donations in aid of urgent structural work at the convent. Sadly, not an awful lot of money was taken, it would appear, and the convent and its organ will have to wait for better economic climates. Ah, la Crisis. 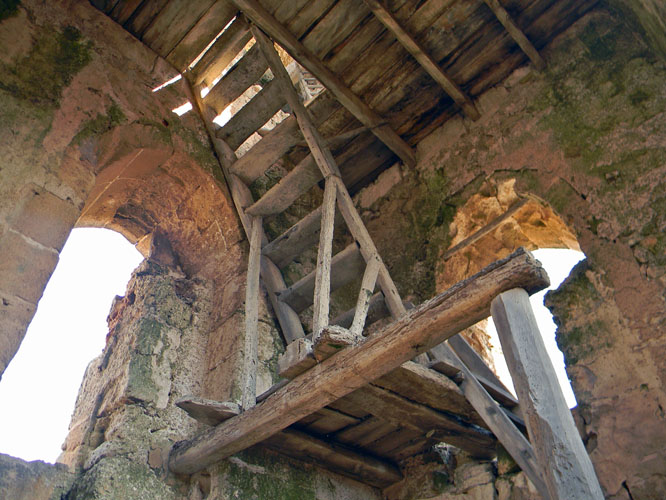