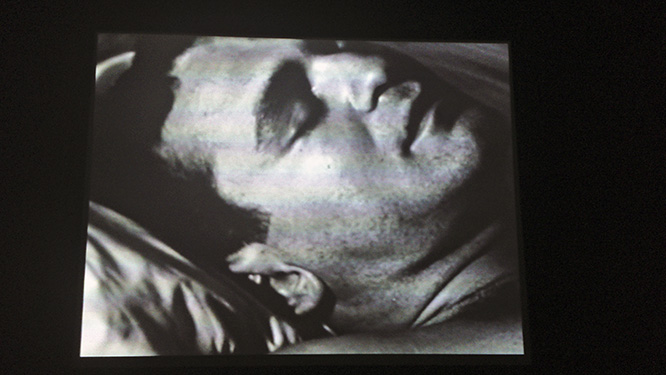 Pop artist Andrew Warhola, better known as Andy Warhol, does not really have a very close relationship with Mallorca, at least not one that I would know about. However, you can now have a close encounter with the art genius by coming to the CaixaForum in Palma where you will find an interesting presentation about the moving image, including an excerpt of a film by the man from Pittsburgh, Pennsylvania. The Caixa exhibition “El efecto del cine. Ilusión, realidad e imagen en movimiento” includes a 50 minute long excerpt from Andy Warhol’s cinema piece Sleep, an extract of the 5 hour 21 minute b/w original, shot mute in 16 mm (1963). The film was one of Warhol’s first experiments with filmmaking, and was created as a kind of anti-film.

According to the Internet Movie Database, Sleep was shot over Memorial Day weekend in 1963 in the apartment of poet John Giorno, Andy Warhol’s lover at the time. Giorno woke up to find Warhol watching him sleep and Warhol asked him if he’d like to be a movie star. Please watch the video interview with John Giorno (below) for more fascinating information. I had a chance to see the entire full length movie myself at a film festival in Munich in 1967; I also remember a number of encounters with Warhol himself, twice in London and once in New York.

The photo was taken in Palma, Mallorca, Baleares, Spain. The date: November 23rd, 2011. The time was 14:05:49. The video was borrowed from the Internet, courtesy of YouTube and nritsma.