Mallorca Is Not Spain

You may have noticed an occasional voice that clamors independence from Spain for Mallorca.

The reasons for such declarations are numerous and varied. For a start, Mallorca speaks a different language from mainland Spain. Then, Mallorca was absorbed under the Crown of Castile by marriage and amalgamation, not by popular consent. And, last but not least, Mallorcans eat Sobrassada, a concoction that no Spaniard in their right mind would ever eat.

Mallorca was re-conquered from the Moors on December 31st, 1229 (I made reference to that historical date only yesterday).

The bull in my picture is an advertising hoarding that has made Spain famous abroad. It is an icon that was – and still is – used for Spanish Brandy from the Osborne sherry makers. Some people in Mallorca (and in most parts of Catalunya as well) do not like this toro symbol, as it represents for them the intrusion and absorption into the Spain of Madrid for all that stands for (Franco, repression, the Civil War, you name it). 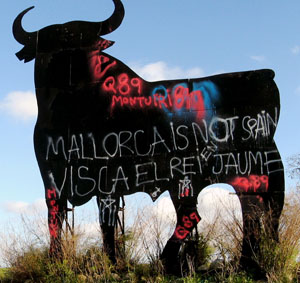 No wonder that the graffiti reads ‘Mallorca is not Spain‘ and ‘long live Rei Jaume I‘.

By mallorcaphotoblog
On January 1, 2008
2 Comments