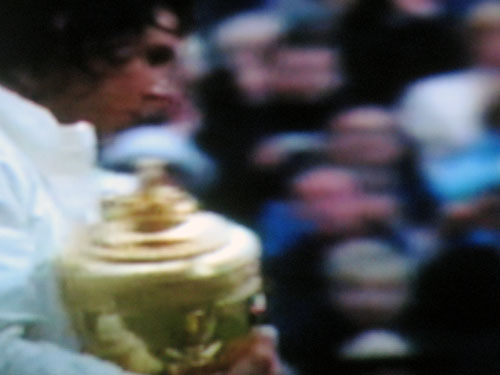 Nadal became the first male since 1980 to win the Roland Garros/Wimbledon double, after beating five-time defending champion Roger Federer 6:4, 6:4, 6:7, 6:7, 9:7 in the Championships final. It turned out to be the longest men’s final in Wimbledon ever, and what a thriller it was.

It was the third year running that Federer and Nadal met at the Wimbledon finals. This year, Rafa proved the stronger maverick. Congratulations.

I can assure you that Mallorca, and Spain, are proud of their young hero. What euphoria after having just won the European football championships 2008.

The main photo was taken off the TV screen in Felanitx, Mallorca, Baleares, Spain. The date: July 6th, 2008. The time was 23:01:48. The smaller photo was borrowed from the Internet. Thank you.