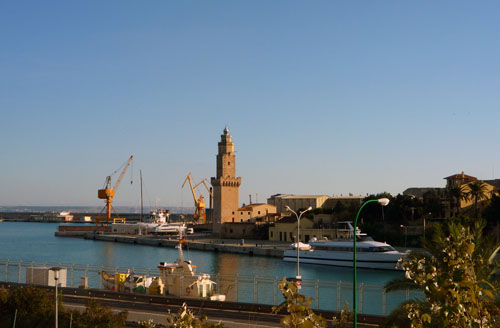 The Torre de Senyals, also known as Faro de Porto Pi, in Palma de Mallorca, is a historic lighthouse which was built in 1290 but relocated and heightened in the early 17th century. The lighthouse sits on a busy, industrial waterfront on the east side of Palma’s harbor, opposite the Passeig Marítim. Despite its historic distinction, this lighthouse is hardly ever mentioned as one of the sights of the city.

The lower part of the torre was originally used as a signal tower, defending the harbour entrance and at the same time signalling the arrival of incoming boats. Its height was raised in 1613, since which time it was used as a lighthouse.

There are a total of 49 lighthouses in the Balearic Islands, of which 23 are located in Mallorca.

All Balearic lighthouses come under the jurisdiction of the Autoritat Portuària de Balears.

The sleek boat in my photo, pictured on the right, is Juan Carlos I‘s yacht Fortuna, given to the King of Spain by the Mallorcan business community, for royal leisure activities and some regal sailing competitions.