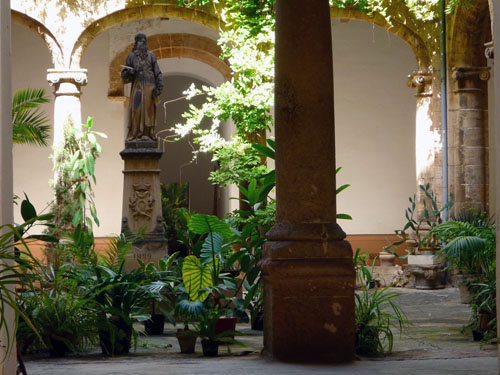 The Col·legi de la Sapiència (school of wisdom) in Palma’s old town, shown in my photo, was built between 1628 and 1635, as far as I can fathom. Pope Urban VIII issued a bull sanctioning the college. He was the pope, by the way, who was involved in the controversy with Galileo.

In the old days, each village in Mallorca was allowed to send one pupil to this Catholic church school, with the exception of Palma and Artà, who each were allowed two pupils. In 1985, the building became the seat of the Seminari Major, a kind of university for priests.

Part of the Seminari Major is the splendid Capella de Sant Pere, built in 1894. Another part houses the Museu Bíblic, paying homage to the Holy Land. In this museum, you can admire Mallorca’s only Egyptian mummy‘s sarcophagus, brought back by one of the Crusaders.

I have heard it once or twice that the Col·legi de la Sapiència was built on a site where one of the two main Jewish synagogues had stood in the 14th century, but I have not yet been able to verify this.