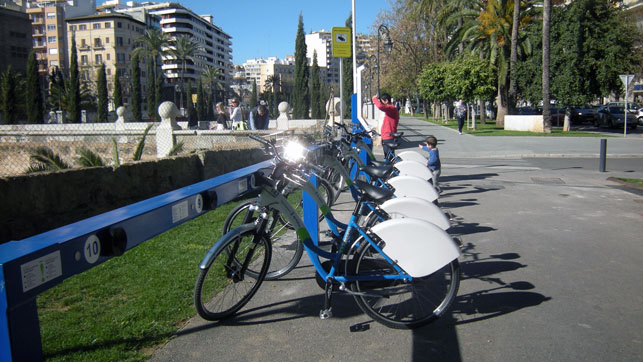 The cycling lobby in Palma de Mallorca is well pleased. For a start, an extended net of cycling lanes was implemented over the last few years, culminating in a good stretch of the Avenidas being freed up for cycling lanes some 18 months ago. A total of 45 km of cycling lanes are now available in Palma’s metropolitan area and it all amounts to a successful bit of environment friendly city management, much to the delight of bicycle wielding citizens (see map below). 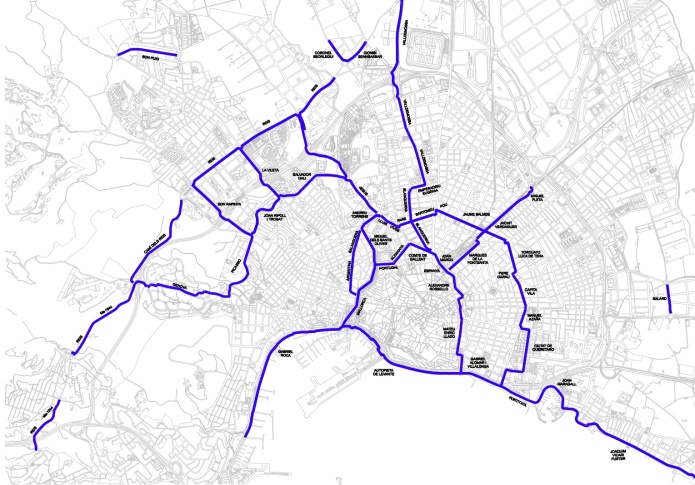 Now there’s even more good news: BiciPalma is here. The bicycle sharing municipal initiative was successfully tested in metropolitan areas such as Barcelona, Bilbao and Sevilla. Now it is Palma’s turn, albeit for the moment on a trial basis. Some 28 pick-up and return stations are distributed all over Palma (see Google map, below). At the moment, 336 brand new bicycles are available for rent for up to 2 hours per day, with a recommended rental period of 30 minutes at any given moment. One needs to be a resident of Palma over 16 years of age and possess a Tarjeta Ciudadana (Resident’s chip card), pay a onetime registration fee of 5 € and off one goes. Those aged under 18 will need parental authorization. Interested citizens had to put down their name and only the first 5,000 applicants are being considered for now. A total of 4,500 subscriptions have already been taken up and the remaining 500 places should be filled any time soon. If you missed the boat, you’ll have to join the waiting list. The service is for free for the time being but, in the long run a small hire charge will be levied, such as 0.50 € per each half hour. More than the 336 bicycles under the scheme at the moment should become available in the long run, if and when the initial phase proves successful. 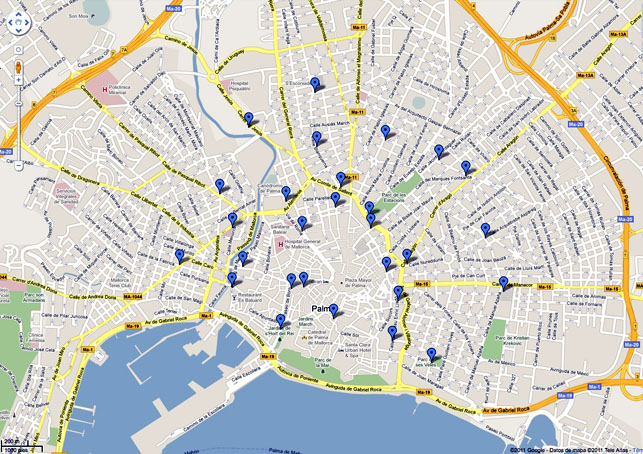 The BiciPalma service will be available all year round, including Sundays and holidays. Bicycles can be rented Mondays to Thursdays, as well as Sundays and on public holidays, from 07h00 to 22h00, and Fridays and Saturdays from 07h00 to 24h00. After those times, bicycles can only be returned, but not taken out.

Residents of Mallorcan pueblos such as Algaida, Andratx, Banyalbufar, Binissalem, Calvià, Campos, Consell, Deià, Escorca, Esporles, Felanitx, Inca, Manacor, Mancor de la Vall, Marratxí, Puigpunyent, Sencelles, Sant Joan, Santa Eugènia, Sineu and Valldemossa can apply for the Tarjeta Ciudadana as well but, have to direct their application at their own home town Ajuntament. Bad luck if you hail from Alcúdia, Pollença, Santanyí or Sóller. You’ll have to blame your town hall for not signing up to the scheme.

More details can be found on the BiciPalma home page (Catalan and Castellano only).

The photo was taken in Palma de Mallorca, Baleares, Spain. The date: March 28th, 2011. The time was 17:04:41. The map (centre) was borrowed from the Internet, courtesy of palmademallorca.es. The map (bottom) comes courtesy of BiciPalma and Google.

Muchas gracias, moltes gràcies and thank you very much.