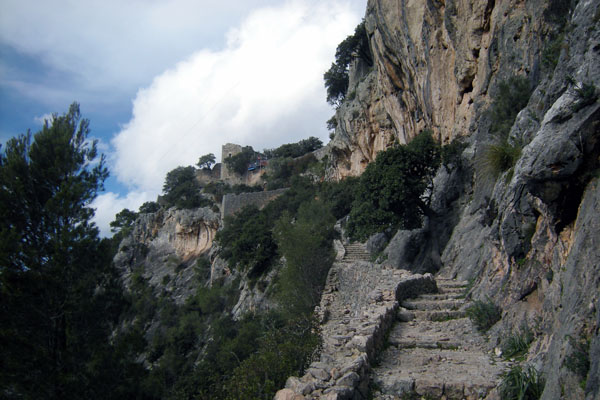 The Castell d’Alaró was called the castle of Hisn Alarun by the Moors, or so it is said. Rumor has it that the fortress may even predate the Moorish period, but exact dates are not known. In any case, the castle has been in a pretty poor state of ruin for a long time now, and some repair work is being carried out at the moment. A visit is recommended and, also, a hike up even higher to the sanctuary of Mare de Déu del Refugi from the 17th century where one also finds a small hospedería (hostel). The views from up there are priceless.

We went for a walk up to the castle from Orient the other day, and what an enjoyable if strenuous hike it was. You could always take the easier option and walk up from the Alaró side, or even drive up to Es Verger, the famous restaurant half way up the Puig d’Alaró. There, I had the best paletilla de cordero ever, anywhere.