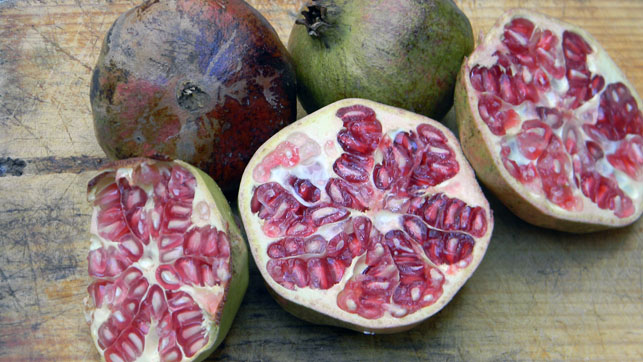 Now is the season of the Pomegranate (Latin: Punica granatum, Catalan: Magraner, Castellano: Granada), a fruit which has been naturalised in the Mediterranean region for thousands of years. The fruit was featured in Egyptian mythology, praised in the Old Testament of the Bible and also, hailed in the Babylonian Talmud. In the Greek myth of Persephone, the pomegranate is called the fruit of the underworld, whilst in the Muslim Qu’uran it is called the fruit of paradise.

Pomegranates have been consumed by man since the beginning of history. We are now beginning to understand how beneficial this product’s juice may be to human health. Its juice is tangy, sweet, rich and full of flavour. This juice can be used as the base for sauces and flavorings for drinks, savory dishes, and sweets, while the whole seeds are a simple delight when eaten fresh or used as a colourful garnishing accent.

This ancient gorgeous fructus with its sensuous crimson coloured seeds is one of my favorite fruits. In June and July, its flower is equally delightful and pleasing for its paradisiacal beauty.

The photo (top) was taken in Felanitx, Mallorca, Baleares, Spain. The date: September 28th, 2010. The time was 12:42:00. The photo (bottom) was borrowed from the Internet, courtesy of treknature.com and the photographer, Aimilios Petrou.