In Mallorca, three different stone categories of substance are traditionally used for the local architecture, Marès (sandstone), Piedra de Santanyí and Piedra de Binissalem. The latter is often called Mallorca’s marble. Technically that is not a correct terminology; the Binissalem stone is rather a crystalline granite with a high proportion of quartz. It is usually of grey or beige colour with a considerable number of quartzite veins. The high density makes the stone very durable and thus, it is used in the construction of stairs, steps, curbstone, flagstone paving, fountains, columns and window sills. This weekend, the pueblo of Binissalem celebrates its Fira de la Pedra de Binissalem i l’Artesania. Activities will go on all day today from 10h00 to 20h00, including a Mostra de Cuina (food fair; 12h15 to 16h00) as well as an art and crafts fair. Some wine treading will be performed at 11h30, together with some dancing of the local Gegants (giants). At 12h30, the Confraria de Cavallers de Sant Jordi will parade their beautiful black thoroughbred stallions of Pura Raza Mallorquína through the town centre. 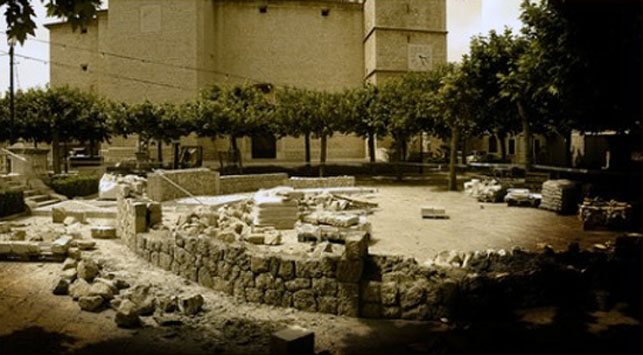 As luck would have it, the local Bodegas José L. Ferrer celebrate their 80th anniversary this year. A new ecological range of organic wines will be presented, aptly called Pedra de Binissalem (D. O. Binissalem). A policy of Open Doors will mark the 80th anniversary. You are invited to pop in for some wine tasting (10h00 to 14h00). If you can’t make it to Binissalem today, I understand that Open Doors activities will actually continue for some time, if not for the rest of the year. Check locally for details or telephone 971.511.050.

The photo (top) was taken in Palma de Mallorca, Baleares, Spain. The date: May 28th, 2010. The time was 14:58:37. The photo (centre) was borrowed from the Internet, courtesy of eventosenmallorca.es.