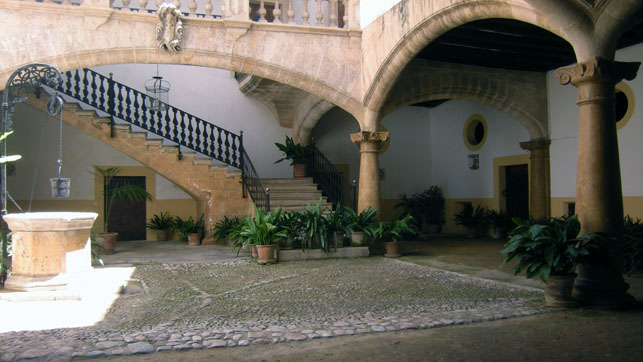 The courtyard of Ca n’Oleza, dating from the end of the 17th century, is one of the best preserved patios (courtyards) in Palma and one of its best known. The imposing building was constructed for Jaume Ballester d’Oleza i Ballester (1625-1699) who came from one of the oldest and most noble families in Mallorca. One of his ancestors, Jaime de Oleza, had come here with King Jaume I, the conquistador, in 1229. The Oleza family was – and is – closely related by blood and by marriage to other families of nobility here in Mallorca, such as the Sureda, Vivot, Berga, and Togores, as well as the Condes de Ayamans. It’s a small world.

The historic Oleza courtyard is unique in Palma for its wide, low arches, the loggia, the ionic columns with their pronounced convex curve, and the wrought-iron railings. The Oleza style probably served as an inspiration for the design of other courtyards in Palma carried out during the 18th century, for instance Can Morell (Casal Solleric).

Ca n’Oleza was sold a few years ago to one of the property tycoons here on the island, one who also owned the local football club. A substantial down-payment was made at the notario meeting, but subsequent contractual payments were defaulted. The buyer has since gone into receivership and a court order was obtained to annul the incomplete transaction. The submission was granted and the property has reverted back into the hands of the vendors. I do not know if Ca n’Oleza is back on the market now, but, I doubt it given La Crisis and all that.

On the subject of patio tours on the occasion of the upcoming Festa de Corpus Cristi, I have to inform you that the annual visits have been cancelled this year. Cosa política, I was told, and something to do with the recent municipal elections. You can see the splendid patio of Ca n’Oleza through the iron gate but, entry into this courtyard or any other one is not permitted this year, I am afraid. What a shame.