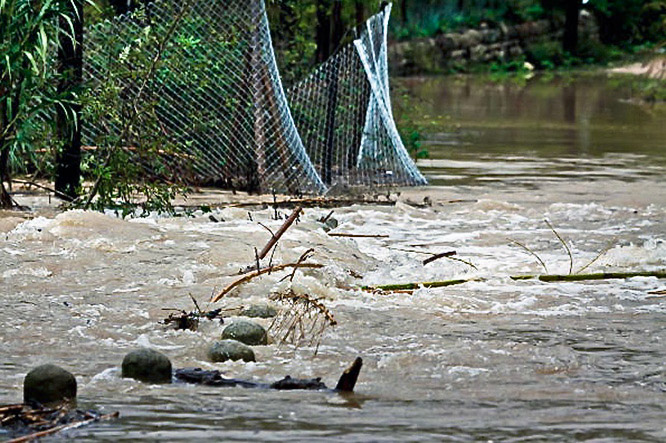 When it rains in Mallorca, more often than not it comes down in buckets. After an awfully long period of dry weather, rain, storm and Trombas de Agua come back with a vengeance between last Saturday and Monday. The European weather station EUMETSAT even classified the recent storms as Tropical Like Cyclones.

The average annual rainfall in Mallorca statistically amounts to some 400 litres per square metre island-wide with the exception of the Serra de Tramuntana, where the annual rainfall amounts to 1,250 litres per square metre. Last weekend and until Tuesday morning, it rained 290 litres in Orient, 240 litres in Fornalutx, 210 litres in Bunyola, 200 litres in Lluc, 170 litres in Sóller, 155 litres in Alfàbia, 150 litres in Galilea, 135 litres in Alaró, 125 litres in Puigpunyent and 90 litres in Palma. The rainfall in Orient was the largest on record for over 60 years. Numerous roads were inundated and some had to be temporarily closed off to traffic. Winds were recorded in the Serra de Alfàbia at speeds of up to 112 km/h. Some serious damage to buildings, cars, trees and animals was recorded but, thankfully, no human injuries or major mishaps were reported.

Instead, there was good news as well. Gorg Blau and Cúper, Mallorca’s two main embalses (water reservoirs) had been down to an alarming 23 % of their capacity at the end of October. But, with rainfalls in excess of 244 litres per square metre, both reservoirs are now filled to almost 40 % of their storage volume.

The rainy storm front appears to have moved on yesterday. The outlook for Mallorca is now dry and sunny.

The photo was borrowed from the Internet, courtesy of diariodemallorca.es and the photographer, B. Ramon.