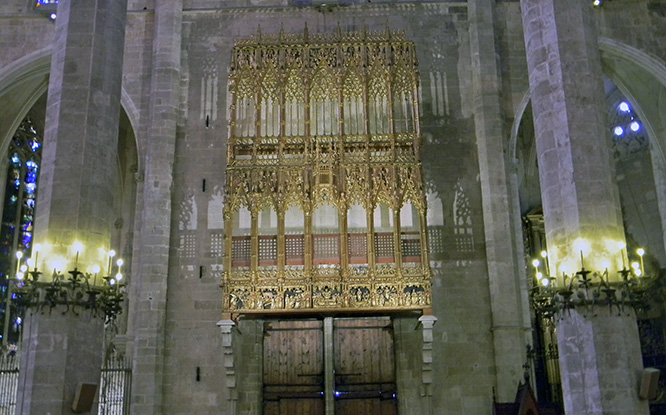 La Seu, Palma’s Cathedral of Light, is always worth a visit. In case you haven’t been back to the Cathedral, you might wish to consider revisiting. Recently, scaffolding was lifted from the Gothic altarpiece mounted above the inside of the Portal des Mirador. A team of art restorers had been busy for months behind tarpaulin cleaning, repairing and re-gilding the Gothic piece which, around 1420, had presumably been created by Llorenç Tosquella the Younger. In its day, this altarpiece formed the major element of the Altar Major like an open cage with the top and the bottom panel of my photo (above) constituting the back and the front of this altarpiece box. During the 18th century, this beautifully carved object was dissembled, moved and stored away. Then, in 1904, Antoni Gaudí rediscovered this masterpiece and elected to put it in its current position during his ten-year stint of re-organising and redecorating Palma’s Cathedral. Since then, the Gothic altarpiece had not been touched, until now.

Treat yourself to some visually stunning piece of Gothic sculpted work. You will be hard pressed to find a better specimen of Mediaeval art anywhere. Mallorca residents can visit the Cathedral anytime free of charge. Non-residents will have to pay 4 € for a visit, entering through the Museu de la Catedral.

The photo (top) was taken in Palma de Mallorca, Baleares, Spain. The date: November 12th, 2011. The time was 10:12:51. The photo (bottom) was borrowed from the Internet, courtesy of diariodemallorca.es and the photographer, B. Ramon.

By mallorcaphotoblog
On November 17, 2011
2 Comments