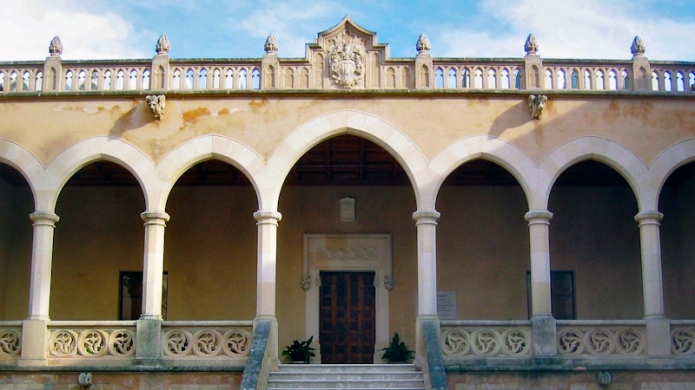 Surely, the Castell de Son Mas building in Andratx can take the credit for being one of Mallorca’s most attractive town hall settings. The Ajuntament de Andratx acquired the splendid building during the 1990s, did some extensive refurbishing and moved its municipal administration there some ten years ago. In the old days, this erstwhile privately owned country estate had been extended over time and rebuilt, with a defense tower (the Torre del Sagrament) being added during the 15th century. This fortification proved useful when Andratx suffered attacks by Saracen pirates and Maghrebian insurgents in 1553, 1578 and 1643 or thereabouts.

There is no evidence that Son Mas existed during the Moorish period, unless one supposes that the very large aljibe (water reservoir) on the grounds of Son Mas might date back to just that, a Moorish influence.

In recent years, Andratx, its Ajuntament and its former Batle (Mayor) made some unfortunate headlines for a fair amount of wheeling and dealing outside of legitimate limits and legal boundaries.

The photo (top) was chosen from my archive. It was taken in Palma de Mallorca, Baleares, Spain. The date: April 1st, 2006. The time was 17:15:04. The photos (centre and bottom) were borrowed from the Internet, courtesy of andratx.net.

By mallorcaphotoblog
On November 23, 2011
3 Comments