Doing a daily photo blog about Mallorca for almost five years inevitably turns you into an authority on things Mallorcan, or so some readers think. The secret is, I am not. Thank you, Amel, for asking for advice on Halal butchers, or Signe, for asking about sea shells, or Adel, for asking about Mallorca’s Gay scene. That’s what I think you were asking for, anyway. The truth is that I know a little about a lot of things but, I am not an expert in anything really.

Take the Gay & Lesbian scene here on the island, just as an example. I definitely have not the faintest idea. Perhaps one should know something about our homosexual neighbours but, I can’t pretend that I do. Okay, I know that there are leaflets and a map on the scene in Palma’s Tourist Information office, bless their little cotton socks. I also know that the scene appears to concentrate around the Gomila area of Palma, with a bit more in s’Arenal. There are three or four gay saunas in Palma, and quite a number of hotels, bars, cafés, clubs and discos catering for the same-sex community. In Avinguda Joan Miró, one can find at least four gay bars, Marcus, Status, The Black Cat and Yuppi Club. In s’Arenal, there is a girls-only bar, Sólo para Chicas, if that is what you want. In general, there seems to be no animosity towards homosexuals here in Mallorca. There certainly is no animosity here on the Mallorca Daily Photo Blog, or so I’d like to think.

A while ago, I did a blog entry about beaches for nudist bathing. Gays and lesbians bathers seem to be attracted to Es Trenc just the same, and also to Caló des Grells, Platja del Mago (Portals Vells) and La Niña Muerta (Can Pastilla).

For gay cruising or after-hours sex encounters, it seems that Dic de l’Oest (Dique del Oeste) is the best bet, not far from Caló des Grells. I would just urge you to bring condoms.

Should you need to get more information on this subject, addresses or other details, I would direct you to mallorcagayguide.com, cometopalma.com/gay-palma or gaypalmademallorca.com. 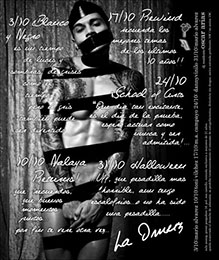 The photo was borrowed from the Internet, courtesy of flickr and the photographer, ‘YÁRRET.

By mallorcaphotoblog
On February 10, 2012
2 Comments