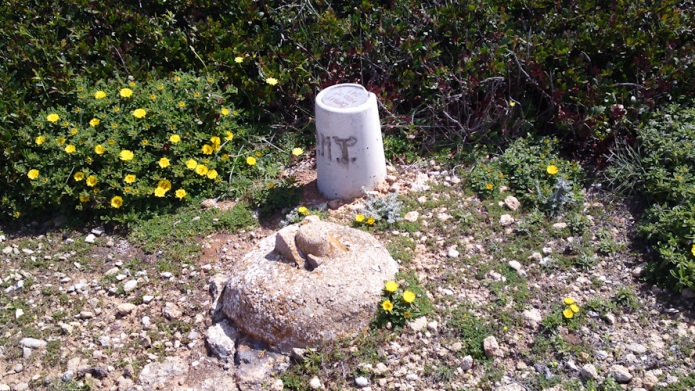 Walking along the Mallorcan coastline, you will inevitably stumble across some hitos (Castellano) or fites (Catalan), boundary stones fixing the demarcation of the maritime border.

In 1988, when the Spanish Ley de Costas was approved, all Spanish coastlines were declared Dominio público marítimo terrestre (Public Domain), granting the general public a right of access. In theory this right of access was meant to stretch 100 m from the waterfront. Here in Mallorca we find ourselves lucky if a corridor with a width of 20 m is maintained. Just recently, there were newspaper reports claiming that the Ley de Costas instigated by the government under Felipe González is likely to be watered down by the current conservative administration. We shall have to wait and see. The boundary stones used to be simple markers made of sandstone whilst now new ones have been placed made of concrete and fitted with a metal plaque. In my photo you can see old and new ones, side by side. In fact, often the new marking stones are quite a way removed from the old boundary markers and quite often, are further inland.