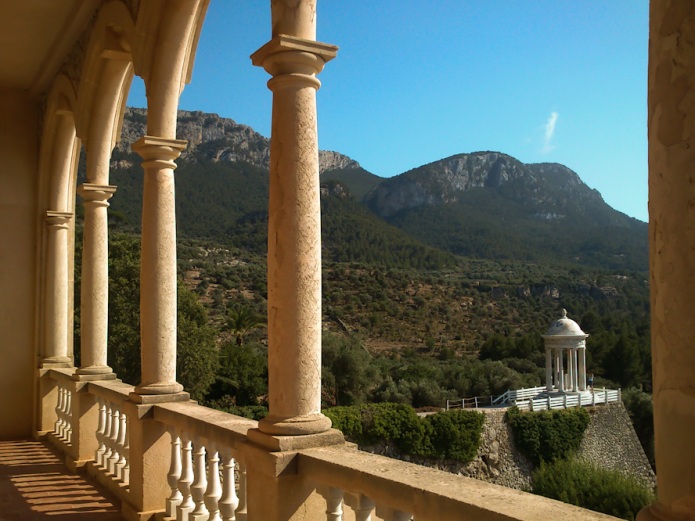 The annual Festival Internacional de Música de Deià is in its 34th edition this year. Owing to its two main venues, the parish church in Deià and the nearby Possessió de Son Marroig, the festival is mainly dedicated to chamber music of the classical kind, but there are some exceptions every now and then. The 2012 festival started in April and seven concerts have already been performed. There will be another concert tonight at 21h00, at the venue of Son Marroig (see photo top), with American pianist Suzanne Bradbury and German clarinettist Sabine Grossmeier performing works by Bernstein, Bax, Weber, Ravel, Milhaud, Fromm-Michaels and Winding. There will  be eight more concerts between July 19th and September 27th. You can check the programme here. Tickets are still available at 20 €.

Son Marroig is a fabulous country estate. It was one of the many old Mallorcan manor houses that the Austrian Archduke Luis Salvador acquired during the late 1800s. He actually resided in this particular mansion for long periods, considering it the best location in all of Mallorca. The estate houses a museum dedicated to the Arxiduc, well worth a visit. Admission has gone up to 4 €. The gardens alone (photo bottom), the sea views from there and the lovely pavilion made in marble from Carrara are worth the entry fee.

If you are a music lover, you will be pleased to hear that the Festival de Pollença will start tomorrow, July 6th.There were rumours earlier this year that the festival may not be held this year at all due to, you know, La Crisis. But no, ten concerts have been confirmed between tomorrow and August 25th. I may report about the Festival de Pollença a bit later in the year. We are lucky, really, concerning music here in Mallorca.