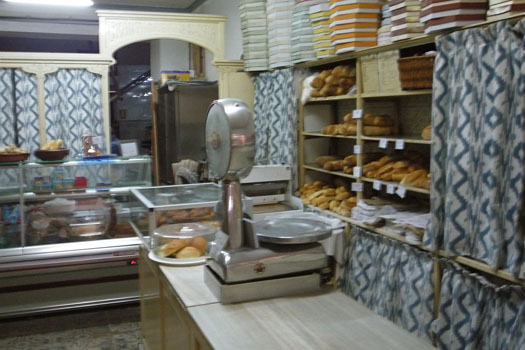 I cannot think of many smells that excite me as much as the smell of freshly baked bread, coming from a baker’s shop somewhere in the neighbourhood. Good quality bread to me is like a fundamental human right. Sadly, as I grow older I find that this basic entitlement to my daily bread more often than not gets tampered with in quite an unpardonable way.

One of my favourite memories related to bread and Mallorca is of a visit to a friend’s house in a small pueblo somewhere near Felanitx, many moons ago. My friend’s mother had lit the wood in an old stone-built horno (bread oven) in the patio of her village house, earlier that morning. She had prepared the dough for 16 loaves of pa pagès the previous night, kneaded the dough herself, let it ferment over night and then formed the balls of dough for the 16 loaves. Now she was baking the loaves in the oven. Seven of the loaves were for herself and her husband, one for each day of the week, and seven more for her son’s family, again to last all week. The two spare loaves were baked por sí a caso (for just in case). The same day of the following week she would light the oven again and bake 16 more loaves, and the week after that as well, and so forth.

Not many people in Mallorca nowadays bake their own bread even though most every house in the country and in the pueblos still have their own horno. Sad, really, how time changes our attitudes and behaviours.

In some villages in Mallorca and in half a dozen bakers’ shops in Palma you can still get pa pagès prepared the proper way, baked in wood fired ovens. One of these bakers in Palma is the Forn de la Glòria (pictured here), reputedly in the making of barras, pan and bastones for almost 800 years. With that much tradition the road has aptly been named after the horno as Carrer des Forn de la Glòria. They are open every day of the week except Mondays. Apart from bread, ensaïmadas are made on the premises as well, as are empanadas, cocarrois, crespells and robiols. Give yourself a treat; the wonderful smells come for free.