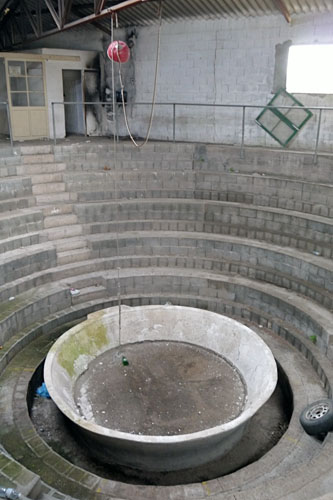 The other day I went back to a place in Manacor where I had watched a cockfight some 30 years ago. Cock fighting is a blood sport between two roosters, held in a ring called coliseo or arena palenque (cockpit) with seats for spectators. Cockfights are now illegal in Spain with the exception of the Canary Islands, and in most of Europe, as far as I am aware. I have a feeling that it was illegal in Mallorca already in the late seventies as well, but it was practised regardless whereas nowadays, one can no longer ignore the law. As you can see from my photo, the Manacor coliseo is now in a very bad shape and quite obviously, is totally abandoned.

Cockfights are still widely popular and a legal sporting event in much of Latin America and South East Asia, including India and China. Advantage is taken of a cock’s natural and strong will to fight against all males of the same species. Roosters are specially bred to increase their aggression and stamina; they are given the best of food, care and consideration. The cocks are often equipped with gaffs tied to their legs as a reinforcement of their natural spurs.

The fight is not intended to result in the death of one of the animals but it may end that way because the birds never stop fighting till the very end. Of course, gambling is always involved in cockfights, as it was in Mallorca when I witnessed one all that time ago. No, I did not place any bets at the time, and sadly, I did not take any photographs then, either.

I had been invited to attend the Manacor spectacle by Francisco, a local farmer whose speciality it was to breed fighting cocks. On one occasion he invited me back home to his finca to proudly show me his gallos. I can’t imagine that Xisco is in the breeding business any longer. He must be in his seventies by now and well into his retirement.

The photo (top) was taken in Manacor, Mallorca, Baleares, Spain. The date: April 30th, 2009. The time was 17:38:38. The photo (bottom) was borrowed from the Internet; the cocks are fighting somewhere in Thailand. My thanks go to Sanuzbord.